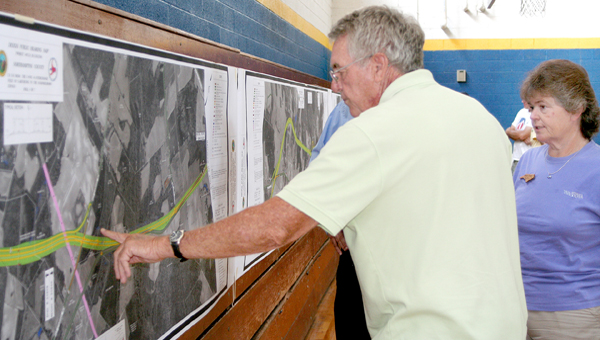 Sam and Becky Turner of Jackson study a map to see how the plans to widen US 158 between I-95 and the Murfreesboro Bypass will impact their property. The Turners were among numerous individuals to attend one of three public workshops conducted last week by NC DOT in Northampton County. Staff Photo by Amanda VanDerBroek

CONWAY – Opinions on the widening of US 158 were varied during a public hearing held here.

Last week, local citizens gathered at Conway Middle School to see the selected route chosen by the North Carolina Department of Transportation (NCDOT) and how the new route would affect their homes and property as well as submit comments and questions to DOT officials. Two other public hearings were held last week as well in Garysburg and Jackson.  The widening of US 158 will convert the existing two-lane highway from the I-95/NC 46 Interchange near Garysburg to the Murfreesboro Bypass into a four-lane, median divided highway that will include some service roads. The proposed highway will have 12-foot lanes, paved shoulders, and a 46-foot wide grassy median. Additional right of way and the relocation of homes and businesses will be required for this project.

The purpose of the $283.5 million project, according to information provided by DOT, is to improve traffic flow and level of service, fulfill US 158’s role as a Strategic Highway Corridor, Intrastate Route and meet Federal Highway Administration’s Strategic Plan objectives, improve safety, and improve access to existing and future industry.

According to NCDOT District 1 Engineer Jerry Jennings, it is an identified project within DOT’s Transportation Improvement Plan, which is a seven year road building plan.

“The entire project from 95 to Murfreesboro is being done as one environmental document, but it will be constructed within a number of phases over several years,” he said.

Jennings said the earliest section, beginning at the I-95/NC-46 interchange, is scheduled to begin in 2016. Right-of-way for that section is slated to begin in 2014. The project will then work east toward Murfreesboro.

“We basically have to go out and survey all the corridors we were studying,” he said. “The last time we were here, two to three years ago, we still had multiple corridors that we were looking at.”

Potter said the team would go out and look at the environmental factors to quantify the wetland impacts versus stream impacts, residential and business relocations.

DOT then meets with environmental agencies to discuss with all of the alternative routes.

“We have to sit down together and come up with a final alternative, that’s where were at now,” Potter said.

According to DOT, the project requires 38 residents and four businesses to relocate along the 35 mile area affected.

Sam and Becky Turner of Jackson said the way they access their property would hinder their farming.

“That’s what we’re kind of a little bit upset about,” said Mrs. Turner. “We farm, and our access is headed east and our farms are west.”

The couple’s access to their property, located between Conway and Jackson, would be hindered by not having a directional crossover in the median near where their equipment is stored. The Turners said they would have to travel with their four-wheel farm equipment pulled by a tractor on the highway nearly one mile to access their property.

Mrs. Turner said she felt the purpose of project was not for evacuation purposes, but rather to suit the needs of local industries.

“This is ridiculous, we’re 75 miles in from the coast, past three major intersections—this is not evacuation,” she said. “I just wish they would tell the truth about it.”

Mr. Turner said DOT does not plan to place a cross over near their driveway. He said another solution would be to create a path on the own property to avoid having to travel on the road, but that would take even more land away from the farm and increase costs for the couple.

Lesley Kirby of Edenton said likes the idea of the widening the road.

“I think it’s needed,” he said. “Anytime you do something like this it’s going to take up a lot of property and everybody thinks it’s unnecessary. …I think the road should be here, but I think it should be straighter than what I see.”

Crystal Whitley of Murfreesboro sympathized with the area farmers affected by the project.

Michael Bell of Jackson said he is in support of the project despite having to relocate due to it.

“I kind of feel like if the state and government is going to make that type of investment I’m hoping that there going to be some progress involved,” he said. “I kind of hate to move, but I would hate to think I was the person preventing progress from happening in my community and my county.”

He said based on what DOT was saying the widening of the road would help Northampton County by way of growth.

“It appears to me that industry and jobs and stuff are coming to the area, and I’m not one that’s going to stand in the way of anybody’s progress,” he said. “If I’ve got to give a little bit for the benefit of a lot of other people, I got to say I’d rather be with the program than against it.”

Jennings noted everyone would be dealt with on a case-by-case basis and DOT did not want to cut anyone off from their property. He noted the utilization of services roads and access points provided off of secondary roads.

“And those that will be affected that we can’t accommodate that will be dealt with through right-of-way process and they will be compensated accordingly,” he said. “We certainly want to minimize impact to everybody through an extent as possible.”

Jennings added that the comments submitted to DOT at these events are taken into consideration.

“All of this information will be compiled and all of it will be put into the record and then decisions will be made after the workshop information is compiled,” he said. “Every one of the comments will be taken seriously as part of the process.”