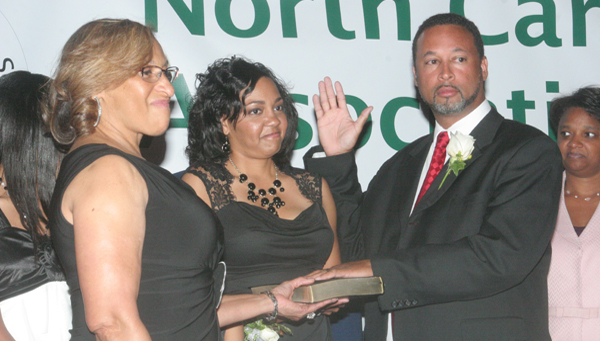 Howard J. Hunter III takes the oath of office as President of the North Carolina Association of County Commissioners on Saturday night in Raleigh. He is shown here with his mother, Dr. LaVerne Espy (left) and his wife, Wanda. Staff Photo by Thadd White

Hunter, who served as President-elect last year, took the oath of office from his father’s friend and fellow legislator the Honorable Toby Fitch. The current Superior Court Judge in Judicial District 7B comprised of Edgecombe and Greene counties, served in the North Carolina General Assembly with Howard Hunter Jr.

“It is indeed a pleasure to be here and have this honor to swear in the new officers,” Judge Fitch said. “Before I undertake that task, let me say to each and every one of you who served the citizens of this great state, thank you.”

Fitch then turned his attention to Hunter.

“Little Howard, I say to you, do the right thing,” Fitch said. “We are all very proud of you and we love you and may God forever bless you. It was a pleasure and honor to be a friend and a colleague of your father…It’s a pleasure to be your friend and to have you call me Uncle Toby.”

Fitch then called Hunter forward. Hunter’s wife, Wanda, and his mother, Dr. Laverne Espy, held the Bible while Hunter took the Oath of Office. After being congratulated by his family, friends and many from Hertford County, Hunter gave his inauguration speech in which he promised to help lead the association to become mentors to those who will follow.

Hunter began by thanking outgoing NCACC President Kenneth Edge for his service and his mentoring spirit.

“Let me first thank my Lord and Savior Jesus Christ for allowing me to be here,” Hunter said.

He then thanked his wife, his children and his mother for their support as he has worked with the Association. Hunter then thanked the Hertford County Commissioners, County Manager Loria D. Williams, the staff of the county and his church family.

“Ladies and gentlemen, we have a charge to keep,” he said. “We are the keepers of the flame for our counties and the association. During my year as president, I would like to emphasize we are not just the leaders for the next year, or for the rest of our time in office, however long that may be.

“We have to think about what we are going to leave behind when we leave office,” he added. “We are setting the stage for future generations. We must make sure that those flames are burning even brighter when we step aside to make room for the next round of leaders.”

Hunter then talked about the man who mentored him when he became a commissioner, the late DuPont L. Davis. He called Davis a “mentor and friend” and said it was his advice and mentorship that led Hunter to seeking the office of NCACC president.

“We have a charge to keep and DuPont recognized this many years ago,” he said. “That charge is to develop the next generation of county commissioners who will lead their counties and this association.”

Hunter talked about the Association’s Youth Summit which allows commissioners to mentor a student from their home county.

“We’re not just teaching them about county government, but about being a great leader; about being responsible for something that is much bigger than you as an individual,” he said. “This initiative from past president Mary Accor will have long-term benefits for our association and for our counties as we educate future leaders about county government. It will not be too much longer before one of the youth who participate in this summit returns to the conference as a county commissioner.”

Hunter then asked the commissioners to become more involved in not only serving as mentors, but also as ambassadors for the association. He said it was important for the good news about the work the counties do for citizens.

“We have a charge to keep and that is to ensure that our counties continue to run smoothly after we have moved on,” he said.

Hunter spoke about the work of the staff of each county. He said it was important for the association to make sure there would be quality individuals to fill those roles in the future.

“Over the next year, this Association is going to develop a County Management Fellowship program that will foster and promote careers in county management,” he said.

He also said the association will work with the state’s colleges and universities to identify ways to attract students to careers in county government. He added that those students would be paired with veteran county managers to receive mentorship.

Hunter also talked about his parents and the influence they had in his life.

“Growing up I was blessed to have a mother and a father that were active in the community,” he said. “My mother was a teacher. My father was a county commissioner first and then a state representative. I know the importance of learning from someone who has been in the battles.”

Hunter said the association will provide an on-going program to help make sure there are mentors for all those who will come behind the current leaders.

He also said during the next year the NCACC will work with the North Carolina League of Municipalities and the Institute of Government to develop an advanced leadership program for local government leaders.

“This program will be similar to the program sponsored by NACO (National Association of County Officials) that I attended this summer,” he said. “When I started that course I couldn’t wait for it to end. We went from morning to night and the sessions were very intense. By the end of the week I didn’t want to come home.”

Hunter said he learned a lot from both the speakers and his fellow commissioners around the country.

“We must take it upon ourselves to serve as mentors for the next generation of county leaders,” he closed. “Ladies and gentlemen, we have a charge to keep. Let’s keep that charge.”

Hunter will serve the next year as president and then a term as past president on the state’s board.