Twenty years in the making 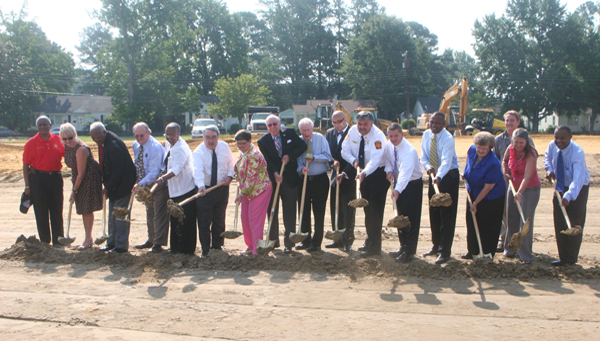 Local, state and national dignitaries came together to turn dirt for the official ground breaking of the new Ahoskie Fire Department Tuesday morning.

AHOSKIE – It is a dream that has been quite literally 20 years in the making.

Tuesday morning, officials with the town of Ahoskie were joined by state, regional and national leaders as they broke ground on the new Ahoskie Fire Department.

Ahoskie Fire Chief Ken Dilday said the town had been discussing the possibility of a new fire house since the 1970s, but the first actual drawings came some 20 years ago.

Dilday went through the starts and stops that finally led the town to constructing the new fire station on a lot on Dr. Martin Luther King Jr. Drive. He said there had been studies on several locations in town, but the current space was finally home for the department.

Ahoskie Mayor Brien Lassiter began the festivities by welcoming the 100-plus people who gathered to celebrate the new fire department.

“We want to welcome everyone to the ground-breaking ceremonies to the long-awaited Ahoskie Fire Department,” he said.

He also welcomed the members of the Ahoskie Fire Department, the Ahoskie Town Council and former Ahoskie Mayor Linda Blackburn as well as the architects and contractors.

Lassiter said the firemen were proud of their building and worked hard to maintain it, but the time had come for a bigger facility.

“They need more room, they need bigger bays, a meeting room and better sleeping quarters,” he said. “In March of 2013, barring bad weather or disasters, we’ll be back here to open the doors.”

The first dignitary to speak was Rep. Mobley who remembered her time serving as a court counselor with an office in the second floor of the Ahoskie Fire Department.

“It is always a pleasure to come and stand before a crowd when we’re getting a new addition to our city as well as our county,” Mobley said.

The next person to speak was Betty Jo Shepheard, the Eastern Representative for U.S. Senator Richard Burr.

“It seems I come to Ahoskie a lot for good things,” she said. “I enjoy every time I’m here.”

She said Burr sent his congratulations to the town.

“Rural Development is committed to the welfare of rural communities in financing essential public structures and providing necessary resources for our first responders,” Gore said. “Fire fighters risk their lives to protect property and citizens and we must assist them by providing the best facilities possible. We are indebted to all firefighters as they risk their lives every day for the well-being of others.”

Congressman Butterfield then talked about the  importance of the facility.

“Thank you so very much for inviting me to be part of this very important program in the town of Ahoskie,” Butterfield said. “I want to thank the mayor, the city council and the manager for all of their hard work and their friendship down through the years.

“One category of people I don’t want to overlook is the family; the family of people that make up the Ahoskie Fire Department,” he said. “Each day you bravely and willingly take on the responsibility of keeping this community safe and protecting the residents from harm. We are thankful for your courage. There are many of our citizens who are alive today because of it.

“You not only deserve our gratitude, you deserve our support,” he said. “That’s why we at the federal level, the Obama administration and the USDA have committed to investing in both rural communities and public safety projects such as the Ahoskie Fire Department.”

Ahoskie Town Manager Tony Hammond also said he was pleased to see the fire department begin construction and that he was thankful for all the work done by the town’s departments to prepare for the groundbreaking.

GATESVILLE – Help! That’s what Terry Greene of Eure asked for here Aug. 1 as he sought the assistance of... read more