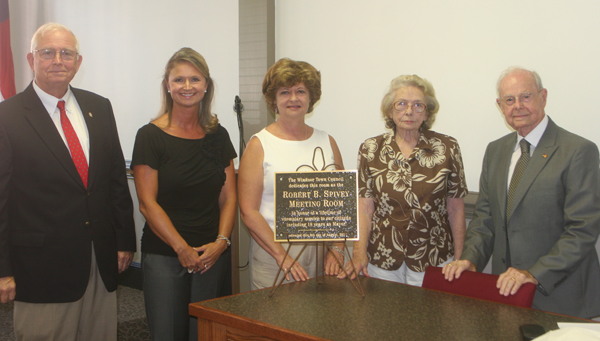 The Town of Windsor honored retired Mayor Robert B. “Bob” Spivey (right) Thursday morning by naming their meeting room in his honor. Joining Spivey (from left) are his children, Lowell Spivey, Gwen White and Debra Jernigan - and his wife, Shirley.

WINDSOR – The man whose presence has been synonymous with the town of Windsor will have his name forever enshrined in the place he helped make his mark.

Thursday morning Windsor Mayor Jim Hoggard and the Windsor Board of Commissioners officially honored retired Mayor Robert B. “Bob” Spivey. The group dubbed the Commission’s meeting area the “Robert B. Spivey Meeting Room” in his honor.

“It’s nice to be here on a happy occasion,” Hoggard said. “We live in a historic town and today it is fitting to honor someone I consider a historic figure.

“Bob Spivey is a man of Windsor,” the mayor continued. “He was raised and educated here, married a local girl, raised his family and served us in man capacities, especially as mayor for 18 years.”

Hoggard said the near two decades in service as the town’s chief executive was likely the longest in history. He went on to say there was no way to list all of the achievements of Spivey’s time as mayor, but pointed out some of his legacy.

“Some of the big things are the Roanoke-Cashie River Center, Vidant Bertie Hospital and that nice four-lane road (U.S. 17 bypass) and these are all things Bob was instrumental in,” Hoggard stressed.

The mayor also said he was grateful for Spivey’s service.

“The Commissioners and I are certainly grateful for the condition Bob left our town in,” he said. “We will always have challenges, but when Bob’s term was over, we had no financial problems, no personnel problems and we were free to work on things that were important and not clean up a mess.”

Hoggard said he had called on Spivey many times since he retired.

“He is a very  humble man and really didn’t want us to do anything to honor him,” he said.

After a round of applause from those who gathered, Spivey spoke as well.

“I am certainly humbled and honored by this recognition,” he said. “This room is very special to me. If I had a choice, which I didn’t know this was going on until it was done, but if I had a choice, this is probably the place I would have chosen.

“This is kind of like the situation room for this town,” he added. “I can remember so many times when the issues of this town were evaluated in here.”

Spivey said he was fortunate to have so many commissioners who worked for the best interest of Windsor.

“If anyone was ever blessed, I was, in having great councils,” he said. “Everyone that served were dedicated to serving the people of this community to the best of their ability.”

He also thanked the two Town Administrators he served with – David Overton and Allen Castelloe – for their work.

“I am honored to have worked with them and been a part of it,” he closed. “Thank you very much. This is more than I deserved and I am very honored.”

WINDSOR – Thanks, but no thanks. The Bertie County Commissioners gave that message to the local school board Monday morning.... read more