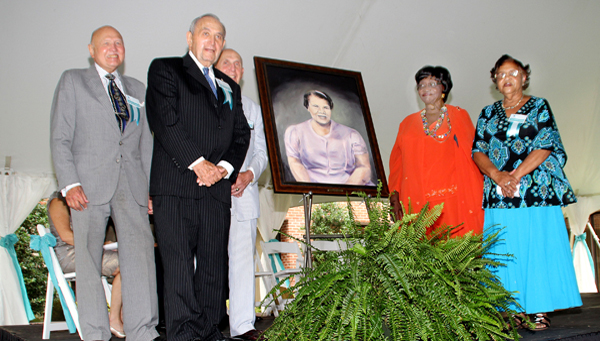 From left, the Zaslow brothers – Jerome, Arnold and Spencer – join with Sallie Weaver and Mary Savage to unveil a portrait of the late Annie Eason, whose name is now attached to the Children’s Unit at Vidant Roanoke-Chowan Hospital in Ahoskie. Staff Photo by Cal Bryant

AHOSKIE – If Annie Eason had lived to see Aug. 7, 2012 she would have celebrated her 106th birthday.

Instead, numerous individuals gathered in her honor and memory on that day and took part in a celebration of a totally different nature.

With a light rain falling on a large tent pitched just outside the Memorial Drive employee’s entrance to Vidant Roanoke-Chowan Hospital, approximately 100 people huddled together to dedicate the pediatric unit of the hospital in honor of Eason, an Ahoskie native who moved to Philadelphia in 1924.

Philadelphia philanthropists and brothers Arnold, Jerome and Spencer Zaslow made the dedication possible with a $40,000 donation in Eason’s name. Abbot Downing, a Wells Fargo business, contributed an additional $10,000 to the donation.

As part of the dedication ceremony a portrait of Eason was unveiled to hang at the entrance of the Annie Eason Children’s Unit.

“We’re here to celebrate the generous gifts from the Zaslow brothers and Wells Fargo and to celebrate the one very special lady who made a difference in the lives of the Zaslows,” said Sue Lassiter, president of the hospital. “Now their gift to Vidant Roanoke-Chowan Hospital will in turn help improve the lives of children here in our community that live with asthma.”

Lassiter continued, “We were all charmed by these gentlemen, the Zaslow brothers, when we first met them in Ahoskie. Their family business is a remarkable story in today’s society. We admire them for the intent to remember Miss Annie. She cared for us through the years and we want that type of devoted love and care remembered in some special way. Now, thanks to the generosity of the Zaslow brothers, as well as the contributions of Wells Fargo and Abbott Downing, Annie’s name will live on right here in Ahoskie at this hospital. Her name will be seen by those children and parents utilizing the pediatric care unit here.”

Lassiter said the funds contributed in Eason’s honor will be used to establish an outpatient asthma program at the hospital, one that will work with children and families to help manage their disease, thus preventing serious asthma attacks that in the past may have led them to visit the hospital’s Emergency Department.

The Zaslow brothers, through their family’s Foundation established in 1989, have a long history of supporting medical, educational and religious institutions. The brothers attribute much of their personal and business success to Eason and wanted to give back to her hometown in her honor.

“I consider today one of the most important days of my life,” said Arnold “Arnie” Zaslow. “Annie was a remarkable lady.”

He went on to thank many individuals, including the Eason family – many of whom attended the dedication ceremony – for the roles they played in making this special day happen. He praised Vidant Roanoke-Chowan Hospital and Vidant Health for the courage and foresight they had in honoring what he called, “an ordinary citizen of Ahoskie.”

“They could have sold the naming rights (to the pediatric unit) to the highest bidder, which is a commonplace activity today,” Zaslow said. “Vidant Roanoke-Chowan Hospital has set a precedent, set an example by bestowing such an honor on an ordinary woman of extraordinary goodness – Annie Eason.”

The brothers added to their already generous gift by donating $5,000 to help establish a fund dedicated to the exclusive use of improving and maintaining the health of Ahoskie’s children. He suggested naming it the Annie Eason Children’s Fund.

Jerome “Jerry” Zaslow recalled a story his mother told him about how his family first connected with Eason, who had relocated to Philadelphia by the time Jerry was a year old and she had placed an ad in a newspaper there entitled, “Situations Wanted.”

“My mother answered that ad,” he recalled. “I was having trouble keeping down my food at that age and Miss Annie told my mother she could take care of me and fatten me up. My mother hired Annie on the spot and gave Annie the responsibility of disciplinary and homemaking duties. She taught us the difference between right and wrong. She instilled in us a respect for all people as God’s children. She was overprotective of us and was a tough disciplinarian and she did one great job. To her, we were her children. I know she’s looking down on us now and is proud of what she sees.”

Also taking part in the dedication ceremony were two relatives of Annie Eason – her niece, Mary Eason Savage, and her cousin, Sallie Weaver.

“I can’t thank the Zaslow brothers enough for the love and support of Aunt Annie,” said Savage, who also praised the hospital, Wells Fargo and Abbott Downing officials for making this day possible. “May God bless you for all you have done to honor Aunt Annie. This day will forever be remembered by the Eason family and the people of the small town of Ahoskie. Rest in peace Aunt Annie because your life, your work and your service have spoken loud and clear for you on this day and in the days and years to come.”

“When she answered that response to the newspaper ad, it was the right fit for Annie Eason as she worked for the Zaslow family for 63 years,” Weaver remarked. “As the Zaslow children grew she made sure they had everything they needed. Even when she came back to Hertford County for visits, she would take back corn, cotton, peanuts and tobacco for her boys to use on their school projects.”

The Zaslow brothers operate an international furniture textiles company, ATD-American Co., located in Pennsylvania, which began as a linen company founded by their father in 1931. The brothers also started the Zaslow Family Foundation, which is focused on giving to medical, education, and religious institutions.

The brothers attribute much of their professional and personal success to Eason and wanted to give back to her hometown in her honor. After many years of searching for the best way to honor Eason and her work with children, the Zaslows visited and toured Vidant Roanoke-Chowan Hospital. They decided giving back to the children of eastern North Carolina would be the best way to honor Eason’s memory.

The State Center of Health Statistics shows that asthma in children is more prevalent in northeastern North Carolina than other parts of the state. Twelve percent of children seen in the emergency department (ED) have had multiple visits due to asthma. Emergency services have seen an eight percent increase of pediatric asthma cases in the last two years.

The asthma program is modeled after best practice programs in the Vidant Health system. The program has documented highly successful results including fewer ED visits, and improved disease management by children, parents, and health care workers. To achieve similar results, one clinical case manager will be employed by the hospital to provide referrals, education, and case management services in homes, schools, and through clinic visits. Goals of the program include reduction of ED visits due to children’s asthma, reduction in school absences caused by asthma, reduction in inpatient admission rates, and reduction in recidivism for patients with asthma.

Hey Hawks Fans! The Chowan scene is starting to pick up and get crazy with all of the fall athletes... read more