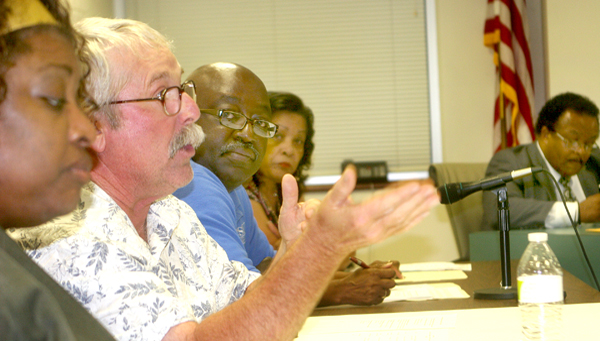 Flanked by his colleagues, Pamela Chamblee and Ricky Freeman, Bertie County Board of Education member Alton Parker explains his reasoning why the county’s Early College High School should not be moved to the campus of the new high school. Shown at the far right is interim Bertie Superintendent Elaine White. Staff Photo by Thadd White

WINDSOR – A major change is likely headed for the new Bertie High School.

Monday evening, the Bertie County Board of Education unanimously – minus Vice Chair Emma Johnson who was absent – voted to remove the auditorium from the plans for the new school and substitute the 12 classroom addition.

The decision was announced to the public during a joint meeting of the school board and the Bertie County Commissioners held Monday night.

After several questions from the audience referenced the ability of the board to change its mind and not build the auditorium when the school is constructed and instead add the classrooms, board member Pamela Chamblee responded.

“Just a few moments ago, prior to coming here, our board has unanimously agreed to eliminate the auditorium if it will expedite this process to ensure that as many of our students as can move to the new building will be accommodated,” Chamblee said.

Board of Education Chair Gloria Lee said the move would allow all of the students from Bertie High School and Bertie STEM High School to move to the new building. She said the Bertie Early College High School would remain on its current location which is the former Southwestern High School campus.

Chamblee explained that it would not be beneficial to the Early College students to be moved to the new building.

“The reason for that is I do not believe it is in the best interest of the students attending the Early College to be on the same campus as the regular (early college) students,” Chamblee said. “If you look over at our neighboring counties, their students attend a community college. Because those students are on a different schedule, they need that flexibility.”

When questioned about the need for the students to be able to access the new facility, the board said they were opposed to the idea.

Commission Chairman L.C. Hoggard III said he worked on the campus of Roanoke-Chowan Community College and knew the Early College had to be on a college schedule to be effective.

“As a board member, I would not be in favor of that,” Parker said. “The Early College was designed to be autonomous and they need their own autonomy.”

Parker said technology would be provided to the Early College for whatever need they may have. He also said the campus they currently use was more suitable for green houses and other amenities of the school.

“Under no way would I agree to bring the Early College to the new high school,” Parker added.

He said Bertie STEM High School was designed to work in partnership with the traditional high school and could be put on the same campus with no issues.

Hoggard said he was confused about the message being sent to the two boards.

“What confuses me is I hear people say in one instance the building doesn’t make the students, but then I hear you say they need to be in the new building,” the chairman said. “You can’t have it both ways.”

Charles Harden, a citizen at the meeting, said he agreed with the boards.

“I’d like to chip in and agree with the chairman and Mr. Parker in terms of the Early College,” he said. “I think they are completely right about that. It needs to be in a separate atmosphere and a different culture.”

Harden, who served on the committee appointed by the school board to make decisions about the new school, said the trade off would not be entirely one for one.

The boards had considered the new classrooms would cost approximately $1.3 million as opposed to the auditorium which would cost $1.7 million.

Harden reminded the boards that some additions would have to be done to the equipment in the cafeteria because it had been set up for 500 students rather than 900.

Hoggard said he would like to see the school with the auditorium and board of education members agreed, but said they would rather have the classrooms.

“We agree, but can you afford the money,” Parker asked.

Commissioner Norman M. Cherry Sr. asked if the school board was saying they wanted to build the classrooms rather than the auditorium.

The board said they agreed.

“Not that we want that, but we will settle for that,” Chamblee said.

Commissioner Rick Harrell said the auditorium could be added at a later date.

“I took an oath when I came on this board to educate children and I say classrooms,” he said. “Yes, performing arts are a form of education, but we have to have students ready for college or ready for the workplace. If that means me pulling back from the auditorium to help you with financing, I’m willing to do that.”

He said the board discussed the situation and they were willing to do that.

Commission Vice Chairman J. Wallace Perry asked about the gym because there were already two (one at the current high school and one at Bertie Middle School). He was told the gym had to be on the campus of the new high school because of health and physical education classes.

Ron Wesson, the Democratic nominee for the District One County Commission seat, said the board should explore building both the classrooms and the auditorium.

“I understand now if we added the additional classrooms and we kept the auditorium, the cost would be approximately $19.6 million,” Wesson said. “Is that what I’m hearing?”

Hite said that was correct as far as actual construction costs.

“My question is: what prevents us, what’s the advantage in financing the $19.6 as opposed to the $18 million,” Wesson said. “What’s the difference?

“That’s a question I’d like to get answered at some point,” he added. “If we went the full package instead of making that choice, what is the real difference to us in terms of cost?”

While the school board made their preference known, the commissioners did not vote on the change in the project.

WINDSOR– A Raleigh woman was killed in a two-vehicle crash here Sunday afternoon. According to a report filed by North... read more