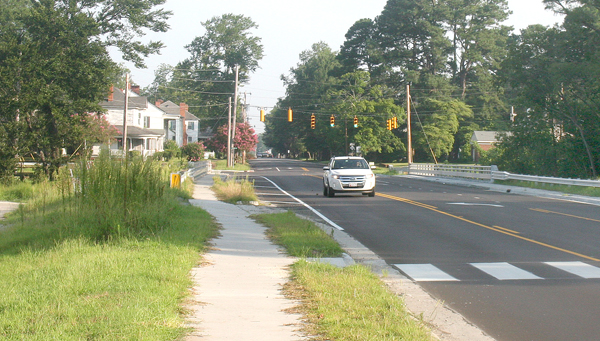 With the exception of some cosmetic work, to include grass mowing, construction is complete on the new Cashie River bridge in Windsor. Staff Photo by Thadd White

Windsor Mayor Jim Hoggard said Monday that some cosmetic work is left to do around the construction site of the new Cashie River Bridge, but that it is working well and all of the building aspects seem to be complete.

The bridge at the corner of King Street at U.S. 17 bypass was scheduled to be roughly a two-year project,  beginning in July of 2009 and ending in May of 2011.

Instead of closing the bridge, North Carolina Department of Transportation officials decided to follow a request from the town of Windsor and Bertie County to do the project in phases. Officials with the town and county were concerned about entirely closing the bridge and cutting off the hospital from fire and rescue.

Numerous problems plagued the project almost from the beginning. Originally scheduled to begin work in July 2009, the project didn’t actually begin until October.

There was also an accident by a contractor for the town that ruptured a water line and delayed work.

Toward the end, the problem was the contractor – Kirkman Construction of Huntersville. During phase two, the town and DOT received numerous complaints about the lack of progress.

While both the town and the Department of Transportation worked to get the project back on schedule, problems remained until the end, more than a year after the initial completion date.

Now, Hoggard said all of that is behind the town’s citizens and those who use the bridge on a regular basis.

“It feels great to see it complete,” Hoggard said. “I still don’t take it for granted. When I go over the bridge, I think about how quickly I get access and how nice it is.”

The mayor said the new bridge is wider and the turn lane on it, he believes, will keep traffic moving better and provide more safety for those using the roadway.

“When those vehicles were going through there, I held my breath,” he said. “We got lucky. With only one lane, a lot of times people really couldn’t get out of the way even though they wanted to.”

While the new bridge and the roadway have been constructed well, the mayor said the next step is getting the area back to its usual pleasant cosmetic appeal.

The town’s park at the end of U.S. 17 bypass hasn’t been restored yet, but will be in the coming weeks. The mayor said some mowing needed to be done as well.

“I think it looks great, but it will approve even more in the coming weeks,” he said.

AHOSKIE – The murder of one of their own has dazed and bewildered the faculty and staff here at Roanoke-Chowan... read more