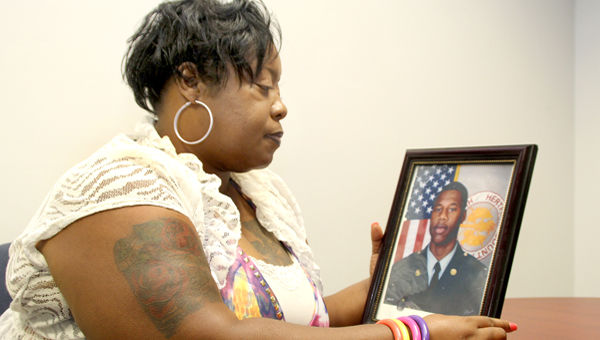 LaVern Harrell reminisces about better days, the ones prior to the May 2010 murder of her son, Ivan – shown in a photo of his Junior ROTC days at Hertford County High School. Staff Photo by Cal Bryant

AHOSKIE – Despite the passage of two-plus years, LaVern Harrell still grieves over the tragic death of her teenage son.

Ivan Jerome Coulton was only 19 years old when he was gunned down on an Ahoskie street in the early morning hours of May 15, 2010. Coulton, a standout athlete at Hertford County High School and a student at North Carolina A&T State University where he received a scholarship to play football, died later that morning at Vidant Medical Center in Greenville.

Even though the alleged shooter was arrested less than one week following the murder, giving Harrell and other family members some measure of closure in this senseless act of violence, she still felt the need to reach out to young people in an effort to give them an alternative to a possible life of crime.

On the second anniversary of Coulton’s death, Harrell and seven other women formed “IV’z Angelz” – a social club founded in her son’s memory.

“I guess you could call us a group of big sisters whose sole purpose is to reach out to our youth and try to make a difference in their lives,” said Harrell who serves as club president.

The first official event hosted by “IV’z Angelz” is billed as a Community Youth Day, scheduled for 3-7 p.m. on Saturday (July 28) at the Ahoskie Amphitheater. That event will feature games and prizes, face painting by Rocquina Vaughan and free food and soft drinks.

“It’s open to all ages,” Harrell noted. “Even if you are an adult, please come out and join us and have some fun.”

The club also has two other events in the planning stages. Harrell said one is an Aug. 11 Gospel Sing at Newsome Grove Baptist Church of Ahoskie.

“We already have a couple of groups schedule to perform, but are looking for more to participate,” said Harrell, who can be contacted at 252-301-1950 for more information about the Gospel Sing.

Also on the drawing board is an Aug. 18 social, tentatively planned to be held at Quinton’s Restaurant in downtown Ahoskie. Harrell said the plans for that event include a raffle to raise money for the group’s back to school giveaway.

“We’re trying to do whatever we can for our community,” she stated. “I’ve been overwhelmed thus far by the response we’ve received. This is close to my heart because it’s about my son. We feel that if we can save one young person’s life, steer one young person away from the bad element then it’s all worth the effort.”

Harrell added that her group’s effort also runs deeper than what’s seen on the surface.

“I don’t want to see a parent or family member have to experience the emotional pain and suffering I’ve been through since Ivan’s death,” she said. “It’s been a little over two years since he was murdered and it’s still hard on me. He meant the world to me. He was a good kid with a bright future. I just keep the faith and ask God for the strength to carry on.”

MURFREESBORO – The Summer Olympics have completed their two-week countdown and now another one begins. August 9 will be the... read more