Mike and Nate bike the states 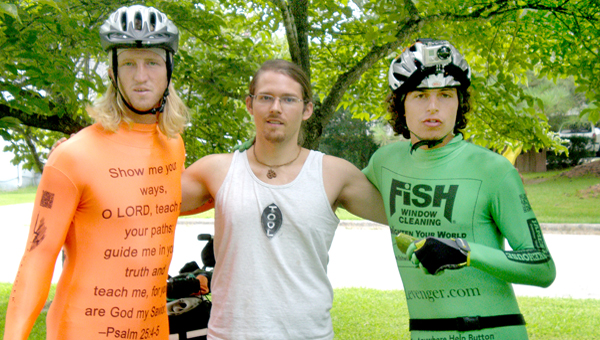 AHOSKIE – When Mike and Nate show up, they arrive riding bicycles and outfitted in neon spandex.

While their appearance definitely turns heads, it’s drawing attention to their cause that’s their primary aim.

Michael Buonaiuto Jr. and Nathaniel Frankoski have a mission to raise money and awareness for wounded veterans through their participation in The Wounded Warrior Project.  In order to do this they are biking up the East Coast, starting in Key West, FL and ending at Niagara Falls in New York.

Their journey has them traveling approximately 50 miles per day for 50 days, and their overall goal is to raise a total of $50,000 to help support injured service members with high quality rehabilitation programs.  Businesses and sponsors can assist them by purchasing advertising space anywhere on their bright spandex uniforms, which attract the eyes of onlookers everywhere they go.  They also share about their mission when passing through towns and encourage people to get involved by joining them for a portion of their trek or making a donation, which anyone can easily do through their website www.mikeandnate.com.

Along the way, Mike and Nate find “checkpoints” for overnight lodging in order to recharge. Recently, they were welcomed to Ahoskie by their host for the night, Nathaniel Glosson, as well as several other Hertford County teachers and friends – to include Rachel Vokally, Rachel Bentley, John Johnson, Richie Halas and Rochelle Sprague – who  provided a potluck supper and fellowship for the bikers.

Along with eating, card games and listening to music, Mike and Nate exchanged their stories from biking the states with the teachers’ stories of their experience living and working in Ahoskie.  Then it was off to bed for some much needed rest before hitting the road again the next day.

However, before heading out, they did manage to grab a hearty, Ahoskie breakfast at O’Connor’s Restaurant, graciously donated by the manager, Howard Brown.

En route, the two men were seen in Whaleyville, VA, just north of the state line on US 13. There, Tracy Agnew, News Editor of the Suffolk (VA) News-Herald interviewed the duo.

“We have a heart for those that fell down for our freedom,” Buonaiuto said. “We want to pick them up and encourage them financially.”

The two friends, who go to church and Florida Atlantic University together, decided to do a bicycle trip to see part of America while raising money for wounded warriors.

“When we decided to do this trip, we wanted to do it for a reason that was selfless,” Frankoski said. “We love God, love America and love people. To marry all those ideas together, we chose the Wounded Warrior Project.”

The duo rode through on the 25th day of their journey, the halfway point. But they have yet to raise even half of their goal — they’ve only gotten to $6,000 so far. But they believe people will step up and donate as they get further into the trip, they said.

“Our job is to bike. Americans’ job is to pay,” Buonaiuto said.

They certainly haven’t spent much money on room and board. They’ve mostly arranged their accommodations on www.couchsurfing.org. They’ve stayed at fire departments and Veterans of Foreign Wars posts, as well as with college students, working professionals, musicians, biker gangs and groups of surfers.

“We roll into the town believing that a place is provided, and it always is,” Frankoski said.

They’ve only paid for one meal along the way, finding friendly managers at local restaurants are more than willing to share after hearing their goal.

Never having been out of South Florida on their bicycles before, the two have seen some interesting things. They ran over alligator roadkill, saw a truck dragging a boat on a trailer that didn’t have tires, and got chased by half a dozen dogs in North Carolina. Much of the trip has been recorded on the camera strapped to the helmet of one or the other at all times.

But they’ve also come across reminders of why they embarked on the journey in the first place.

“We met a veteran named Hector that said the deepest wounds are the ones you can’t see,” Frankoski said. “You can’t take back what you saw.”