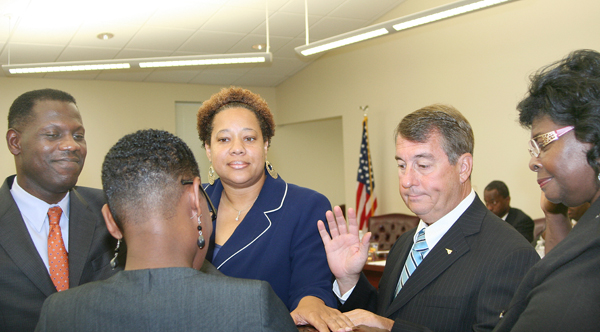 From left (facing camera), Clinton Williams, Erica Smith-Ingram, Phil A. Matthews and Majorie Edwards take the oath of office during Monday’s meeting of the Northampton County Board of Education. New board members Williams and Matthews and incumbents Ingram and Edwards won their bids for election in May. Staff Photo by Amanda VanDerBroek

JACKSON– The Northampton County Board of Education has welcomed two new board members, but the election of board officers has been postponed until next month.

On Monday, the board voted 5-2 to push back the election of officers for 30 days. Meanwhile, Board Chair Donald Johnson announced he is not seeking the Chair office for another term.

The meeting began with new board members Clinton Williams and Phil A. Matthews along with incumbents Erica Smith-Ingram and Majorie Edwards taking the oath of office delivered by Clerk of Superior Court Laquitta Green Cooper.

During the approval of the agenda, school board member Kelvin Edwards questioned Board Attorney Rod Malone about postponing the election of chair and vice chair of the board.

“The protocol in your policy is that you would do it tonight, but the board could waive its policy and decide to move it out a month if that’s what the majority of the board decides to do,” Malone said.

Later, Malone said the bylaw requires the board to elect officers within 60 days of the first meeting at which the new members are sworn in, which differs from the board’s policy.

“A majority of the board could vote to table that for certainly a meeting,” he said.

Edwards said the reason for his question was to allow the new members of the board to have an opportunity to become chair or vice chair.

Ingram moved to waive the policy electing chair and vice chairperson and have the current chair (Johnson) continue in his capacity until a new chairperson is elected. Rhonda Taylor offered a second and the motion passed with Johnson and Marjorie Edwards voicing opposition.

Following the motion, Johnson told the board he would like to read written statement he prepared.

“In order not to forget what I would like to say, I have tried to put into words my feelings about my position on the Board of Education,” he said. “As I look around at the group of men and women here with me I can see years of knowledge and talent that they possess.”

He continued, “Over the 22 years I have served, I’ve held the position of Chair of the Board several times. It is a position one should not take lightly. The other board members should realize the responsibility that comes with being a board member. Much time, effort and prayer should accompany them when they accept this position. Over the 22 years there have been varying degrees of boards and their abilities to work in harmony with one another; some did, some didn’t, but that’s the democratic way of life.”

He referred to the Bible’s Psalm 133:1: “Behold how good and pleasant it is when brothers dwell in unity.”

“I believe in unity; being together as one, yet doing and voting your conviction as led by the Holy Spirit,” he said.

Johnson concluded, “In order to start this year fresh and new, and hopefully showing that I am sincere in my actions, I would like to say I am not perusing the position as Chairman. I would not accept if I were even nominated.”

Matthews thanked Johnson for his service as Chair.

“Mr. Johnson I’d like to say that I honor your wishes you’ve just expressed and I also want to thank your service that you have done for this board most recently and throughout the years,” Matthews said.

“When I accepted the challenge of being a board member, that’s what I accepted—a challenge,” Johnson said. “There was nothing I had to gain (by) being a board member. I had no friends that needed jobs, I had no enemies that needed jobs either, but I felt that I had a need to serve the children of our county and that’s the only reason for 22 years I have been to every meeting except one, and that’s when my wife was in the hospital and she was more important.”

Johnson added the board needed to unify in the upcoming year because “we’re at a crossroads in our educational system and if we’re not together, a house divided will fall.”

It’s funny how you can relate different songs to various moments in your life. For some odd reason each time... read more