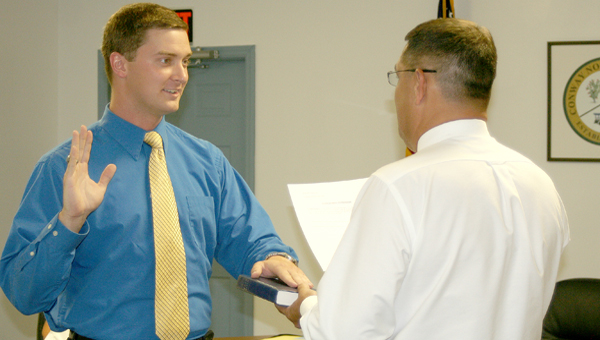 Lance Jenkins (left) takes the oath of office from Mayor Brian Bolton as the newest member of the Conway Town Council. Photo by Amanda VanDerBroek

Last week the 25-year-old was officially appointed to the Conway Town Council as he was sworn in by Mayor Brian Bolton. Jenkins is replacing Phil Matthews who resigned from the council after he was elected in May to the Northampton County Board of Education.

Bolton noted at the July 3 meeting that Jenkins will be the commissioner responsible for Town Preservation.

“I’m honored to be a part of this board and I’m very excited about this opportunity, Town Preservation is right up my alley,” Jenkins said at the meeting. “I have a passion for that so that’s a good niche for me and I will take that very seriously, and I hope we can do some good things.”

For the past two years, Jenkins, a native of Jackson, has worked as Main Street Director in Roanoke Rapids. He recently announced his resignation from that position to take a job at North Carolina Farm Bureau in Conway, one he’ll begin Aug. 1.

In a later interview, Jenkins said he has resided in Conway the past two years and has come to appreciate the charm the town has to offer as well as the potential.

He said one of his goals is to help Conway prosper by balancing economic growth with small town appeal. Adding to the town’s quality of life by way of downtown revitalization, a park in town and showing those from his own generation that they can stay in their home community are a few other objectives he has in mind.

“I like rural America,” he said. “I’d like to emphasize to young people that you can come back to a small community.”

A graduate of Chowan University, Jenkins said his plan to get involved with politics has been no secret.

“The mayor approached me about (the open seat on the board), I expressed interest,” he said.

The term for the seat will expire in November 2013, but Jenkins said he intends to throw his hat into ring fully aware he’ll need votes to keep the position.

“My intention is to run and we’ll go from there,” he said.

AHOSKIE – Ahoskie Post 102 will be where they wanted to be tonight (Thursday). The senior American Legion team will... read more