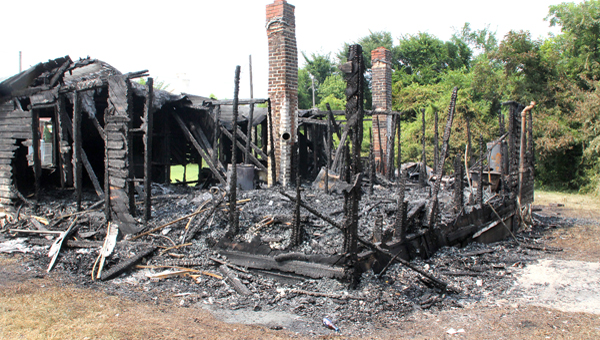 Only the skeleton of framework remains of this Ahoskie duplex that was destroyed by a lightning strike early Monday morning. Fortunately, no one was inside at the time of the blaze. Staff Photo by Cal Bryant

AHOSKIE – Mother Nature is to blame for a fire that destroyed an Ahoskie duplex early Monday morning.

“An eyewitness saw the lightning bolt strike the home followed soon thereafter by the flames,” Dilday said. “We were on the scene three minutes after the call came in and the house was fully engulfed upon our arrival.”

The duplex, owned by Kenny Bradley, was a total loss. Dilday said only one of the two apartments was occupied.

“That gentleman, a Mr. Ruffin, was not at home at the time,” Dilday stated. “The lightning bolt struck his side of the duplex.”

Both local fire departments – Town of Ahoskie and Ahoskie Rural – combined to fight the blaze with four units and 12 firefighters. Dilday said two units and eight firefighters from the Winton Fire Department also responded. Hertford County EMS was also on the scene.

“The weather was still a bit rough – lightning, thunder and rain – when we first got there, but everybody went home safe,” Dilday noted.

Dilday added that he contacted the American Red Cross to assist Ruffin.

“With the exception of what he had on last night, he lost everything he had,” Dilday said.