Truck for a buck 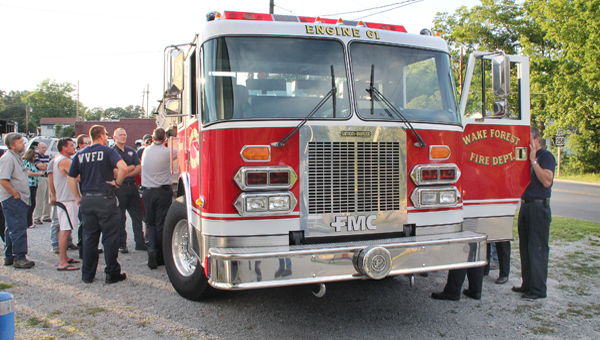 Members of the Woodland Volunteer Fire Department join with town officials and local citizens to admire a used fire engine sold to the local group by the Wake Forest Fire Department. Staff Photo by Cal Bryant

WOODLAND – One truck – one buck.

Members of the Woodland Volunteer Fire Department were the benefactors of a generous act of professional courtesy last week when they accepted a 1988 FMC Duplex fire engine (pumper/tanker) in exchange for a $1 check written to the Wake Forest Fire Department.

The “truck for a buck” was the brainchild of Wake Forest Fire officials. That northern Wake County municipality has experienced rapid growth in population, prompting a need for its fire department to expand.

Wake Forest Assistant Fire Chief Daryl Cash was on hand in Woodland for the presentation, as were two of his WFFD colleagues, Lt. Kyle Mangum and Firefighter Bobby Neal.

Cash, a 27-year veteran, said he remembered the days when the WFFD was hanging on by a thread to keep the doors open.

“At one point in time I can remember the gas being cut off at the fire station because we couldn’t afford to keep it heated,” he said. “I remember selling flounder plates to help pay the bills.”

Now, the Wake Forest Fire Department consists of five engine companies, a ladder company and two rescue companies, all housed in four stations staffed by 52 paid personnel who are assisted by approximately 60 volunteers. The department’s coverage area encompasses 26 square miles, to include Rolesville, Falls Lake and part of Franklin County.

“It means a lot to us to do something like this,” Cash told the large gathering of Woodland residents, including its fire department personnel and town council members. “It didn’t seem all that long ago that we were like you, a small, rural fire department.”

Cash continued, “Today, we’re blessed and fortunate to be at a point in our town’s fire department to be able to do this, to give Woodland this fire engine. (Up until this point) we’ve always sold our used equipment. Our Fire Chief, Ron Early, reminded us of how fortunate we were to have the equipment we have today. He told me that we could afford to give it away. To be honest, that suggestion caught me a little off guard. I was under the thought process that we could use the money we received from selling our used equipment to purchase better equipment for our department.”

Early’s advice finally sank in when he told Cash, “There’s (fire) departments out there that don’t have (what we have) and could really use this equipment.”

“We’re proud to do this for Woodland,” Cash stated.

However, Woodland wasn’t the automatic benefactor of Wake Forest’s generosity. Cash said a committee was formed to study the rural departments in the state that were in need of assistance.

“We went looking for a department that really needed a truck and would appreciate one, a community organization with a huge heart and needs a helping hand,” Cash said.

With that task in hand, Cash said the committee did their homework, searching far and wide for just the right rural department that met the criteria.

“Not only did our committee members talk to you here at the Woodland Fire Department, they also spoke with some of your colleagues at your neighboring fire departments,” Cash stated. “They wanted to hear from those departments exactly what they thought of you. What they learned was that Woodland didn’t have a lot in the way of equipment, but they had a heart, a firefighter’s heart to help their community and to help other local departments when called for mutual aid assistance.”

Cash said it was the response of those neighboring departments that sold the Wake Forest committee on the idea to send their used truck to Woodland. He said the WFFD’s Board of Directors was unanimous in their approval of the committee’s findings.

“Thank ya’ll for what ya’ll do,” Cash added. “You may think sometimes that when you ride through big cites and think about what you don’t have here, or just because your fire trucks aren’t brand new, you are the best fire department in the state of North Carolina because you have a heart. That’s what it takes….your heart and a supportive community. Keep up the good work.”

The bond formed between the two departments will not stop with just the transfer of the title of this one truck. Firefighters from each town now share in a lasting friendship, one that will be seen soon as several members of the WFFD will visit Woodland again on July 21 to enjoy the annual Shrimp Feast.

“You’re part of our family now,” Cash stressed. “We’re all a part of the brotherhood and sisterhood of fire fighting. If there’s anything down the road we can do for y’all, just let us know.”

The generous gift gave the Woodland firemen a time to reminisce about their proud past, remembering a handful of men that decided in 1940 to do what they could to offer fire protection to the citizens of this small Northampton County town. It wasn’t until nine years later (1949) that town officials actually gave the authority for the organization of a fire department, one consisting of a chief and four firemen.

“Ya’ll know me and ya’ll know where I’m from….like it says (on this plaque, one displaying a photo of the transferred fire truck, the date and a one dollar bill), in honor and in memory of the original Woodland Volunteer Fire Department and Rescue Squad,” said Woodland native John White, still a member of his hometown fire department although he lives in Wake County where he works as a paid fireman for the City of Apex. “I never forget where I’m from and I’ll never forget the brave men who took the initiative decades ago to serve our little community with a fire and rescue squad.”

It was White that helped to make the Wake Forest Fire Department realize the needs in Woodland.

“We owe John a debt of gratitude for his legwork in this endeavor,” said Woodland Fire Chief Cleve Bowen. “He got things going with the Wake Forest guys who, in turn, put in countless hours on this project. We thank the Wake Forest Fire Department for not only what they’ve done for our town, but what they do each and every day to offer fire protection for the citizens of their district. This means a lot to us. Bless all of you.”

“Words can’t express the gratitude, not just for this truck, but for the fellowship, the brotherhood that we’ve come to know with the members of the Wake Forest Fire Department,” said Robbie Collier, Woodland VFD’s Assistant Chief. “No matter where you go there’s always that brotherhood of fire departments willing to help each other. I can assure you that the way that you have helped us with this truck, we will use it to help others as well.”

Collier said the Woodland Fire Department was the hub of the small town.

“When something happens, a tornado, a hurricane, this is the center, this is where people will come looking for help,” he noted.

With the addition of the WFFD truck, the Woodland Volunteer Fire Department now boasts of five engines, a brush truck and an equipment truck. And, as long as this current group of Woodland firefighters live, they’ll remember the generosity of their Wake Forest brethren and the truck they purchased for a buck.

WOODLAND – The Woodland Board of Adjustments denied an application for a conditional use permit to open an electronic gaming... read more