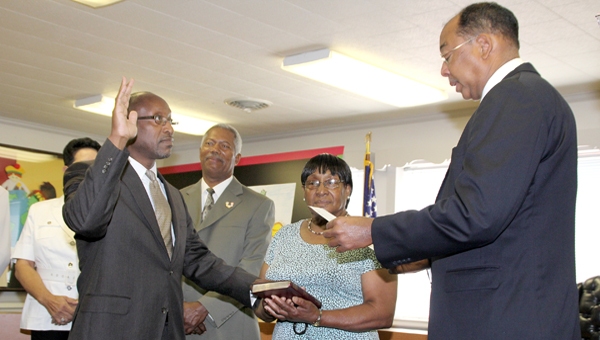 That was the brief statement made by Dr. Michael Donnell Perry just moments after he received the oath of office here Friday morning as the new Superintendent of Hertford County Public Schools.

That short, to the point directive summed up what Perry brings to the table….a man with a work ethic that was born and bred in Hertford County.

“This is where I wanted to be, in this chair in my home county,” said Perry as he sat in his Winton office following the swearing-in ceremony. “I feel that I’ve done the things necessary in the field of education to get to this point of my career. I’ve worked through the ranks, there’s not a department here that I have not touched or worked in as a director or executive director.”

Perry said that experience is vital, now more than ever.

“There are so many issues and challenges coming up over the next couple of months,” he noted. “I feel the urgency, even though the schools here have accomplished so many good things over recent years. But we are starting a whole new era of education statewide. The silver lining to that is we already have a lot of good people in place here to meet the upcoming challenges.”

Even though Perry and the rest of the HCPS staff are already gearing up for the start of the new academic year in August, he sees a need to schedule meetings in the next week or so with county citizens/groups.

“I want to talk to as many people as I can; I want to hear what they have to say about the state of education here in Hertford County,” he stressed. “Even though I feel I have a fairly solid plan in my mind on how things need to be done, I will have an open mind, my ears will be open to what they feel the focus and the plan needs to be.”

Perry continued, “When the talk turns to budgets, core curriculum, federal and state mandates, I want our citizens to know that those things not only touches our school system, they impact the community as a whole. We are Hertford County Public Schools, the key word there is public. I need our citizens involved in their schools. The public, especially the parents of our students, can be very influential in what we do and how we go about doing it.”

The new superintendent said he wasn’t bringing any “magic elixir” with him in order to cure any ailments within HCPS.

“This system is well, and that’s because of its people, the staff already in place and those who already left us – all of them have built a solid foundation for continued growth,” Perry stated. “Now I want to see us get even better, improve in each and every facet of education.”

Perry does inherit an experienced staff at the HCPS Central Office as well as on the school level. He does, however, have to replace two retiring principals – Greg Hogue at Hertford County High School and Nora Artis at C.S. Brown High School.

“We may look within our own ranks for replacements, or we may choose to go outside our system,” Perry said. “Whatever the case those two positions leave us with some big shoes to fill.”

There are also big shoes to fill in the aftermath of the most recent test scores by HCPS students. While those numbers have yet to be officially released, they do give Perry and others within the local school system plenty of reason to smile.

“The level of the bar has been raised; now the challenge awaits next year’s students to meet or raise that bar,” Perry concluded. “One of the biggest factors of success is to have been successful somewhere. When our incoming students for 2012-13 see what was accomplished by their predecessors, they will want to jump on the bandwagon. More than that, they’ll see they don’t have to wait until they get to high school or even to the middle school to experience success. And success is contagious, it also touches the teachers, the administrators and the community. The pride is back in Hertford County Schools and I’m happy to be here to watch it expand further. Let’s go to work.”

Perry, 51, was selected April 30 by the Hertford County Board of Education as School Superintendent. He began his new duties June 25.

“We are so thankful that we chose Michael and that Michael chose us. We are looking for great things from him and his leadership,” said David Shields, Chair of the Hertford County Board of Education, during Friday’s swearing-in ceremony.

While a native of Bertie County (Merry Hill), Perry moved at a young age to Winton with his parents – Clarine Perry and the now late Jerome Perry. He graduated in 1978 from Murfreesboro High School where he was a star on the football field, playing linebacker and tight end for the Raiders, coached by Herman Clark.

Perry comes to Hertford County after serving as Assistant Superintendent for Curriculum and Instruction in the Richmond County Public School system. He is a former teacher here locally as he taught 5th grade language arts at R.L. Vann Elementary School from 1986-1993. He then served as the Instructional Specialist for Hertford County Schools from 1993-96.

After spending one year as an Assistance Team Reviewer for the NC Dept. of Public Instruction, Perry spent the next four years (1998-2002) in Wilson, first as Assistant Principal at Fike High School and then as Principal at B.O. Barnes Elementary School.

Perry holds both a Masters in Elementary Education degree and an Ed.D. (Doctorate) from East Carolina University.

He and his wife, Beryl, are the parents of three children – Stephanie and Michael, both graduates of UNC-Chapel Hill, and Leah, a rising senior at UNC-CH.

WINTON – Hertford County’s highest ranking deputy has been suspended with pay after being charged with assault on an inmate.... read more