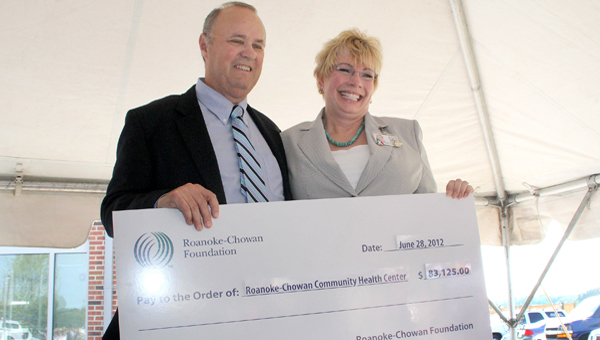 AHOSKIE – Dental care in the four counties of the Roanoke-Chowan area received a big shot in the arm on Thursday.

Not only did East Carolina University’s School of Dental Medicine follow up on its promise by opening the first of 10 Community Service Learning Centers statewide in Ahoskie, its partner in this endeavor – Roanoke-Chowan Community Health Center – gained much needed funding that will allow patients of that entity to benefit from oral healthcare.

The Roanoke-Chowan Foundation awarded RCCHC a grant in the amount of $83,125….money that will help offset the price of dental care.

“We wanted to make sure that we had a collaborative community based approach for the best possible care and pricing,” she noted. “There are so many here within our four-county service area that do not have access to oral health services.”

RCCHC and ECU officials were hoping that the federal government would step in and fill the gap, thus making dental care affordable for everyone, not just for those living in poverty. However, federal budget cuts erased that possible assistance.

“That left us scrambling to figure out how we could pay for our sliding fee scale patients so they could have the opportunity to receive oral healthcare,” Schwartz said. “The first door we knocked on was the Roanoke-Chowan Foundation. It was no surprise to us that they responded in a big way.”

That funding ($83,125) will allow RCCHC to directly refer all qualified sliding fee scale patients to ECU’s Community Service Learning Center for oral healthcare at a significant reduction in cost. Schwartz said that 100 percent of that grant will be applied to the direct use of that service…no administrative fees will be subtracted.

“The old saying that it takes a village, in our case here it takes a really involved, committed, caring, supportive village,” she said.

Charles Hughes, Chairman of the R-C Foundation, and board member Dr. Mike Alston formally presented the $83,125 check to Schwartz as a part of Thursday’s grand opening of the ECU Service Center.

“Mike and I are natives of Ahoskie and we’re extremely pleased that we can be here today as part of this great endeavor to go forward in improving medical and dental care in our area,” said Hughes. “The Foundation is happy to help this endeavor proceed.”

RCCHC, which will open its new office in November, will integrate its medical records with the ECU Center. They are separated by a mere 30 feet.

Ahoskie and surrounding counties have fewer than 10 dentists. Overall, North Carolina ranks 47th out of the 50 states in the number of dentists per capita, according to the Cecil G. Sheps Center for Health Services Research at the University of North Carolina at Chapel Hill.

Nationally, the ratio is six dentists for every 10,000 people.

It’s being compared to such landmark decisions as Roe vs. Wade and Brown vs. Board of Education. In a 5-4... read more