Another ‘first’ for Ahoskie 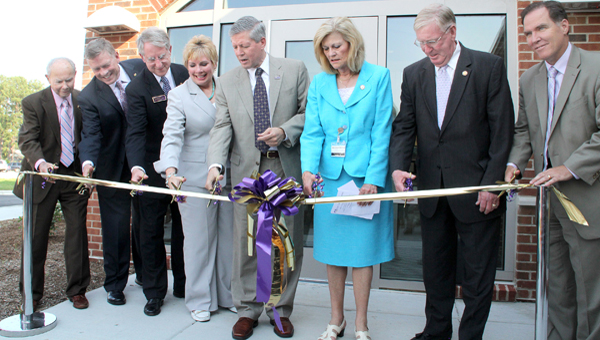 AHOSKIE – During its short history, the town of Ahoskie has experienced many firsts – the only municipality in the world by that name and the original town in the nation to receive a Hill-Burton federal grant (in 1949 to help build what is now Vidant Roanoke-Chowan Hospital).

Now the town can add another first to that list.

The 8,000 square foot facility, which came with a $3 million price tag, combines clinical education and patient care. Led by ECU dental faculty members, fourth-year dental students will spend nine-week clinical rotations at 10 such centers planned statewide while general dentistry residents will also hone their dentistry skills at the centers. The centers will provide dental care to Medicaid enrollees and other members of the community who lack regular dental care.

“We are delivering on the exact promises we made in 2005 when we said we wanted to deliver medicine in a different way in North Carolina,” said ECU Chancellor Dr. Steve Ballard as he addressed a crowd in excess of 100 that gathered on the lawn of the new facility located off Hertford County High School Road.

“We found that 50 percent of the counties in our state do not have an adequate number of dentists to serve their population,” Ballard continued. “It’s taken us a while to get this (the dental school and Community Service Learning Centers) fully implemented, but it happened because of hundreds of people fully supporting the idea, including you here in Ahoskie and surrounding communities. We’re taking the need for dentistry out to where it is most needed.”

Ballard paid special recognition to several individuals that were 100 percent behind the effort to bring the School of Dental Medicine to ECU, including 86-year-old Dr. Ledyard Ross, a retired Greenville orthodontist whose generous $4 million gift led to the naming of that Dental School building on the Greenville campus as Ross Hall.

He also noted the attendance at Thursday’s ceremony of approximately 50 first-year students at the ECU School of Dental Medicine.

“Not every university in America puts service first, but for 105 years East Carolina University has put service first,” Ballard added. “In our College of Health Sciences, service first is not just a motto, it’s the soul of what we try to do….to serve underserved students throughout the entire state and serve underserved populations across our state. This state of the art dental clinic in Ahoskie, the first of 10 across the state, is a great example of our service first motto.”

Dr. Greg Chadwick, Interim Dean of the ECU School of Dental Medicine, said he couldn’t think of a better place than Ahoskie to open the first Community Service Learning Center.

“The celebration today is many, many years in the making and took the efforts of many, many people….some are here today and they can rightfully claim a role in the events that led to what you see standing before you, this state of the art Dental Center,” Chadwick stated. “One such partner is (Roanoke Chowan Community Health Center CEO) Kim Schwartz. She was determined from the outset to make this work, to make the partnership between her group and ECU a national model for others to study and follow. She never wavered from that vision or that commitment.”

Chadwick said the mission of the Community Service Learning Center was to provide and enhance oral health services to underserved North Carolinians. At the Ahoskie Center, that service will be provided to residents of Bertie, Gates, Hertford and Northampton counties.

“Many of the (dental school) students you see here today, plus the ones that follow in the years to come, will be living in Ahoskie for nine weeks while they learn and train here at the Service Center,” Chadwick said. “These Centers are an integral part of our Dental School. They will be staffed by faculty, students, residents and other dental professionals that will live in places like Ahoskie to provide much-needed dental care for Medicaid eligible patients, sliding-fee scale patients and local citizens who don’t have a dentist or don’t have access to regular dental care. Our students will learn and gain experience first-hand in these community settings.”

Chadwick said, in essence, the ECU School of Dental Medicine in Greenville is, “cutting the fourth floor of Ross Hall into 10 pieces and moving the dental school across the state to underserved areas.”

Chadwick said the staff at the Ahoskie Center will begin seeing patients in early July. That staff will start with four Advanced Education General Dentistry residents as well as Dr. Ford Grant, the Ahoskie Center’s first faculty dentist.  Sarah Tune is coming onboard as the Business Manager of the Ahoskie Center. Both will live in Ahoskie.

Schwartz, whose organization is in the final stages of building a new community health center adjacent to the ECU Service Center, said the two entities were a perfect match.

“The last time I smiled this much was my wedding day,” Schwartz said to a round of laughter. “But that’s very appropriate as we are marrying these two projects together.”

While RCCHC has spent the last seven years providing quality healthcare to local residents, Schwartz said she didn’t rest on those laurels. Rather she went looking for healthcare partners, especially one dedicated to offering oral healthcare as a priority.

“We found that partner in East Carolina University,” she said. “Our partnership is the first in the nation of a community health center and a dental residency program that are co-located together.”

She continued, “This marriage exceeds anything I ever imagined. It brings to mind the words of Dr. Martin Luther King, who said that faith is taking that first step even when you don’t see the whole stairs. There are so many that have kept the faith to see this day happen…we took those steps one at the time.”

She called the ECU partnership one that was built on the true meaning of community based care.

“Not only will all of our assisted patients have access to dental services, but everyone in our region has the opportunity to make ECU Dental Services and Service Learning Center here their dental healthcare home.”

Patients may receive a variety of services, including general, preventive and emergency dental care as well as crowns, root canals and bridges.

ECU admitted its first class of 52 dental students in 2011. The second class of 52 will start in August. All are North Carolina residents, and the school focuses on recruiting students from rural areas who want to return to those areas to practice.

For more information about the dental center or to inquire about dental services there, call 252-332-1904.