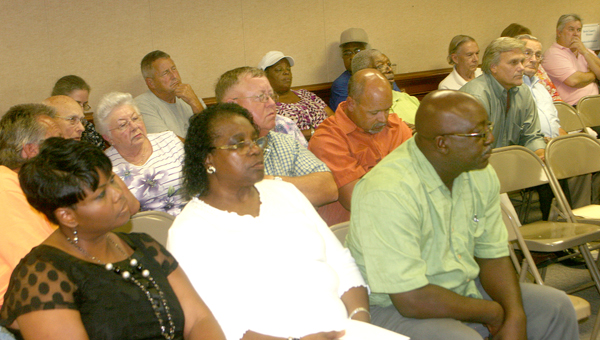 The Board of Commissioners meeting room was full of Bertie County citizens on Monday evening where a public hearing was conducted on the issue of building a new high school. Staff Photo by Thadd White

However, in a public hearing regarding the financing of the facility, citizens asked commissioners to look at alternate sites, consider adding a citizen’s advisory committee and to wisely spend tax-payer money on the facility.

The first to speak during the public comment section was Ronald Wesson, who lives in Windsor and is the Democratic nominee for the District 1 commissioner seat.

“Gentlemen, I believe that the decision you will make on the financing of a new high school may well be the most important decision that you make in your tenure on this board, so I would caution you to think carefully as you proceed,” Wesson said. “Let me be absolutely clear that I am a strong proponent of building a new high school. I believe that our children need and deserve a better place to learn and grow.

“I also believe that spending substantial new dollars at the old site would be a waste of precious taxpayer dollars,” he added. “Unlike some who feel differently, I have toured the existing site with maintenance personnel and I believe that this 50-year-old site is not worthy of additional investment.”

Wesson further stated his belief that the commissioners should ask for an extension on the Qualified School Construction Bonds and take time to move in the right direction to build the school.

“Building the new school is the right thing to do; you simply need to make sure that citizen’s precious tax dollars are well spent,” he said. “Gaining  this extension would give you time to find a better site and additional savings to make this project something that we can afford and be proud of.”

The next citizen to speak was Monica Lassiter, who said she appreciated the opportunity to voice her concerns.

“I don’t feel that the proper planning has been enforced in building a new school at this time,” she said. “Hasty decisions have been made without doing a thorough investigation which has cost citizens a lot of money.”

Lassiter said citizens should be able to see a blue print of the proposed plans.

John Trent talked about reducing the amount of money being borrowed.

“Now that the commissioners have decided to pursue financing for the new high school, my comments are related to doing all that is possible to lower the amount that ultimately is borrowed.”

Trent said he was in favor of students having “the best education we can afford.”

He suggested the board form an advisory group of citizens with construction experience to serve.  He also volunteered to serve on this board.

Following Trent was John Davis, who talked about the past and the future of Bertie County.

“Bertie County has a proud history since her founding,” Davis said. “She played a part in creating this state, the University of North Carolina and in helping America fulfill her Declaration of Independence that all are created equal, during the Civil Rights movement.”

Davis said mistakes in working toward the new high school had already cost the county 15 years and $3 million.

“The need has never been greater, the decade forward future cost will not be lower and the political will to make this happen appears to be here,” Davis said. “No one can argue the benefits to our children or the upside to our future economic development; however, equally important is the inspirational benefit of coming together over a rocky road as we move forward to growth and a better quality of life in Bertie County.”

Davis said it wouldn’t be easy and that leading never was and that the county should move together from this point to build a quality high school.

“This project can become just another issue in Bertie that divides us and keeps us at a disadvantage to our neighbors,” he said. “If that happens we will continue to wither on the vine.

“It can also be the project that unites us,” he continued. “I ask the commissioners to use the county’s talents and passion to help build something we can be proud of, but at a savings we have not yet identified. Lock in the QSCB bond subsidy and use your citizens construction professionals to find more savings.”

He closed by saying he was for a new high school and that it could be a catalyst for moving Bertie into a leadership role in the region.

Carnell Spivey then spoke and said he agreed with the comments of Trent and Davis.

He said he was concerned that citizens weren’t being allowed to provide input into the building of the new school.

Milton Felton said he wanted the commissioners to think about the amount of money that was being spent.

“I think the main thing that is stirring people up is they think we are starting in a mud hole,” Felton said. “We’ve got a good piece of land out there to grow pine trees. I think it would be alright for the county to keep it. In 25 or 30 years your grandchildren might be able to sell it and have the money for the county.”

He said he recognized the old high school was old and worn out.

“Think about what we’re doing here,” he said. “If you start out in a hole, you’re going to stay in a hole.”

He said the land would cost more for everything that had to be done in the life of the building because of the soil.

“We need to also say do we need a school, we also need to ask can we afford it,” Terry said.

He also asked if the current Bertie High School would be used after the new school would be built. His question was referred to the Bertie County Board of Education.

Roxobel Town Commissioner Henry Boschen asked why the board had selected the site it has for the new high school.

Davis then took the podium again and asked what changed from 2009 when the QSCB funding became available until 2012 to make the school more affordable.

Bertie County Commission Chairman L.C. Hoggard III said all questions would be taken in by the board and answered after they were considered. He reminded citizens the meeting was for the board to listen to their input.

Wesson then spoke to the board again about trying to cut the cost and taking time to find a new location and save money on the proposed construction site across U.S. 13 from the current facility.

Wesson also said he was disappointed to see only one school board member, Rickey Freeman, attending the meeting.

Davis also asked the board to revisit the landfill and see if additional revenues can come from there to keep the tax burden off citizens.

Lisa Briley then spoke to the board and asked them to slow down the process. She said she learned a lot from the meeting.

David Early spoke to the board and said he was scared of the tax rate increase.

“There are a lot of people in this county that are barely making it right now and you put a tax rate increase on them, it’s going to hurt them,” he said. “Once it’s paid for, are they going to drop the tax rate back?”

Hoggard said he appreciated the people coming out and expressing their views.

“I would like to thank you all for coming out,” he said.