The Hertford County Sheriff’s Office has warrants on file for the arrest of 34-year-old Lawrence Jerome Boyce. He is wanted for possession with intent to sell and deliver crack cocaine and possession of drug paraphernalia. 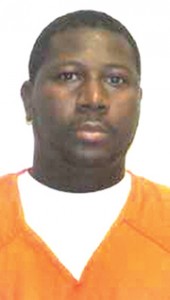 According to the incident report filed by HCSO Deputy Greg Harrison, Boyce is described as a black male of medium build, standing 5’-7” and weighing 180 pounds. He has a tattoo on his left forearm.

Anyone knowing Boyce’s whereabouts is urged to contact the HCSO at 358-7800 or your nearest law enforcement agency.

Boyce was last seen on Friday, June 15 in the area of Curtis and South streets in Ahoskie where he jumped and ran from a blue SUV following a traffic stop by a HCSO deputy. Boyce reportedly entered that van in the Emergency Room parking lot of Vidant Roanoke-Chowan Hospital after leaving the ER where he was transported due to complaining of chest pains. He allegedly left the ER before receiving treatment.

Shortly before 12 noon that same day, HCSO and Ahoskie Police officers served a search warrant and entered Boyce’s residence at 405 South Catherine Street. The officers, after performing an investigation stemming from citizens’ complaints, had reason to believe that Boyce was selling crack cocaine from his residence.

Assisted by a K-9, the residence was thoroughly searched, producing a baggie containing what was described as nine hits of crack cocaine, a set of digital scales and other empty baggies.

The incident report said that once the officers advised Boyce of what was discovered, he voluntarily admitted that the drugs were his. It was at that time Boyce told the officers his chest was hurting.

Hertford County EMS was summoned and transported Boyce to RCH. Meanwhile, Deputy Harrison contacted RCH Police to advise them that Boyce was en route to the ER and to advise him when Boyce was released from the hospital. Harrison also used that time period to obtain the arrest warrants from a magistrate.

Harrison’s report concluded that he was contacted by RCH Police and informed that Boyce had “ran out of the ER and got into a blue SUV with a female.”