Her reaction was to stretch out and yawn in her owner’s lap. 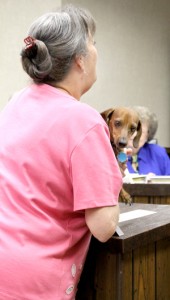 “Snoopy” peers over the arm of Linda Meeks as she encourages members of the Ahoskie Town Council to approve a stricter animal control ordinance. Staff Photo by Cal Bryant

“Snoopy” – the pet Dachshund of Ruby Baker – was viciously attacked April 1 by a much larger dog who was allowed to run at-large. Baker and her pet were both injured in the attack, which occurred while she was out on her daily stroll through the parking lot of the Roanoke-Chowan News-Herald and Parker Ave.

The Dachshund suffered puncture wounds to her stomach, spleen and liver. Following four hours of surgery at Powellsville Pet Clinic it took 75 staples to close Snoopy’s wounds. Dr. Powell also had to insert three drain tubes to assist the healing process. The bill for her medical care amounted to around $1,000.

The attack prompted Baker’s daughter, Linda Meeks, to lobby the Ahoskie Town Council, at their April 10 meeting, for a tougher animal control ordinance. This past Tuesday, Meeks – who accompanied her mother and “Snoopy” to the Council’s June meeting – got her wish.

In a unanimous vote, Council members threw out the old ordinance and replaced it with stricter regulations, including hefty fines for dog owners when their pets are the aggressor in an unprovoked attack.

“Once staff began looking at the ordinance we had in place and thinking of ways we could amend what we had, it was easier for us to just delete the entire ordinance we now have and readopt a brand new ordinance,” said Ahoskie Town Manager Tony Hammond. “What we did was research the ordinances of towns our size who have similar issues with animals and what you have before you today to approve or disapprove is a combination of those different ordinances.”

Meeks was the only audience member to speak during the public hearing held on the ordinance prior to the Council making its decision.

“Snoopy was bitten, scratched and scarred, but she’s alive,” Meeks said, holding the dog while she addressed Council members. “I’m hoping that you will consider this new ordinance. Please approve it on behalf of my family and Snoopy and other loveable pets like her.”

Upon a motion from Councilwoman Elaine Myers and a second from Councilman O.S. “Buck” Suiter Jr., the new animal control ordinance was adopted – one now affectionately known as “Snoopy’s Law.”

The new ordinance carries hefty fines for owners of dangerous animals or dangerous dogs (defined as any animal that had demonstrated a fierce or dangerous propensity or tendency to do any act which many endanger persons or property). If such animal, when unprovoked, attacks, assaults, wounds, bites or otherwise injures or kills a human being, the owner shall pay a $500 fine. The dangerous animal will be impounded and destroyed following a mandatory 10-day waiting period. For each subsequent violation, the owner will pay a $1,500 civil penalty.

A fine of $250 will be levied against the owner of a dangerous animal that, when unprovoked, kills, wounds or worries, or assists in the same, any domestic animal or pet. Subsequent violations each carry a $500 civil penalty. In either case, the dangerous animal will be confiscated and may be destroyed.

The ordinance also prohibits any person to keep or maintain more than three dogs or cats on any parcel of land of less than 20,000 square feet. The fine is $100 per each dog/cat over the limit and subsequent violations accrue every seven days as long as the number exceeds the limit. This part of the ordinance does not apply to dogs/cats that are less than five months old or if the area in which they are maintained is a licensed animal shelter, commercial kennel, or recognized animal rescue organization.

The ordinance also defines (and the associated fines) of animal abuse, the proper vaccination and licensing of dogs/cats, and horses, cattle, swine, chickens and other animals or fowl.

The town of Aulander received a low-interest loan from USDA Rural Development to purchase a new police car recently. Presenting the... read more