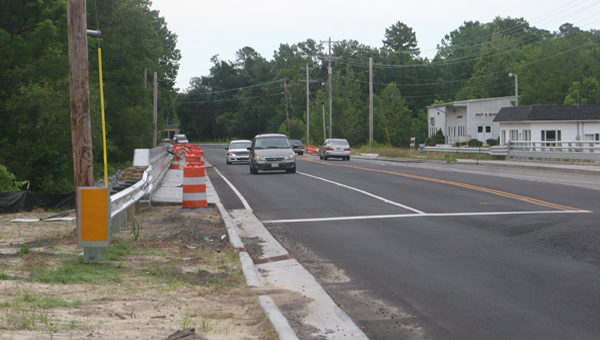 Even though traffic is now flowing in both directions across the new Cashie River bridge in Windsor, the project, now in its fourth year, is not yet complete. Staff Photo by Thadd White

WINDSOR – The bridge over the Cashie River here is nearing completion.

The project, which began in October of 2009 was originally scheduled to be completed in May of 2011, but is not quite finished.

The bridge opened for two-way traffic on Friday, May 25 but there is still quite a bit to be done before it is finished.

Windsor Mayor Jim Hoggard said he was pleased to see the bridge open, but was also anxious for the final work to be completed.

“It’s great to have the bridge open for traffic,” he said. “It almost seems like a luxury now. We used to take it for granted, but it is nice for it to be open and the traffic flowing freely.”

While traffic is continuing to pass over the bridge, there will be some restriction of traffic as the remainder of the work is done to complete the project.

According to Shawn Mebane, a Resident Engineer with the North Carolina Department of Transportation, the final stages of completing the project should be completed in 30-45 days.

In addition to resurfacing the bridge and the rest of the project area, which runs down to Roy’s Service Center, there will still be replacement of some curb and gutter where concrete was damaged. That work is supposed to have begun Monday.

Also, the loops for the traffic signals need to be cut, temporary poles removed, sidewalks finished and driveways repaired.

While town officials will be grateful to see that work completed, Hoggard said the overall impact of the bridge being completed will be good for Windsor.

“It is good for the rescue and emergency vehicles,” Hoggard said. “In addition to that, there is now a turn lane on the bridge which I think will help traffic flow.”

The mayor was also pleased because of the way the bridge was constructed.

“There is less obstruction in the water with the new bridge and it was also built slightly higher,” he said. “I think that will provide some assistance with small flooding.”

The project has had major issues almost since the beginning. It was originally scheduled to begin in July, 2009, but the actual start date was in October of that year.

After work began, a contractor for the town ruptured a water line at the construction site, also delaying the work.

The contract was awarded to Kirkman Construction of Huntersville. During phase two, the town and DOT received numerous complaints about the lack of progress on the bridge.

DOT officials and the town of Windsor worked to get the project back on track, but the problems with the contractor have remained as several deadlines passed without being met.

Mebane called the contractor “extremely slow and unresponsive” during the process of construction.

The two-phase project was done in order to keep at least one lane of the bridge entirely open. The decision was made at the request of the Bertie County Commissioners and the town of Windsor. Both entities were concerned about closing the bridge because the bulk of the town’s population would have been on one side with local fire and police while Bertie Memorial Hospital would have been on the other.