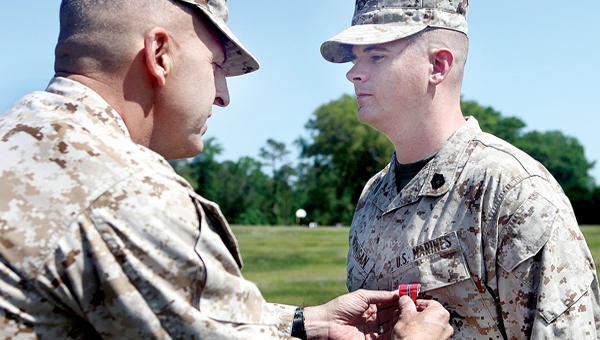 CAMP LEJEUNE — A lone Marine stood before a formation of his contemporaries as he was awarded for valor in a ceremony here May 2.

“I’ve been doing this for 30 years, and this is the most impressive citation I’ve ever heard,” Dana commented after shaking the Marine’s hand.

Sgt. Jernigan is the son of Cindy Blocker and Alan Jernigan. He joined the Marines following his graduation from Gates County High School, right after the terrorist attacks on 9-11.

Throughout the engagement, Jernigan’s vehicle was continuously targeted by the enemy, with rounds impacting the hull as he calmly performed his trade amid the chaos.

His actions ultimately halted the attack – a significant role for any one Marine to play considering the circumstances – yet Jernigan remained humble as he stood before family and friends with two-inches of red, white and blue-striped ribbon of hallowed meaning suspended from his chest.

Though it was his moment, he recognized several other Marines in attendance for their own service and sacrifices over the course of the last deployment. They were also awarded for valor at an earlier date.

“It’s just surreal,” said Jernigan when asked what the meaning of such an award meant to him. “I never expected anything.”

“Boo” – as he is known to family and friends back home in Gates County – has one older sister, Amanda Ward, and twin brothers, Jesse and Johnnie Jernigan.  He recently married Pam Yates, also a native of Gates County.

“Robert is just a good, all-around person,” Ryan said. “He is very humble, but I could always sense the inner strength he possessed.

“He’s a great role model for his family and for those that know him,” Ryan added. “He’s also the type of person that when he comes home to Gates County he always makes the rounds to see everyone. That includes his visits to Gatesville Elementary School. He’ll just stop in and check to see how everyone is doing. He’s such a goodhearted person and we’re very proud that he decided to make the sacrifice to join our nation’s military and protect the freedom we all enjoy.”

“He was a cool kid; he worked hard in school, always seeking to please his teacher,” Kirby said. “At that age, he was all boy at times, if you know what I mean, but he knew when the fun and games were over and when it was time to get serious about his class work.

“I was very proud when I learned that he joined the military over 10 years ago,” Kirby added. “Now I feel even prouder to know that the young boy in my classroom from all those years ago has earned the Bronze Star.”