‘They will never return’ 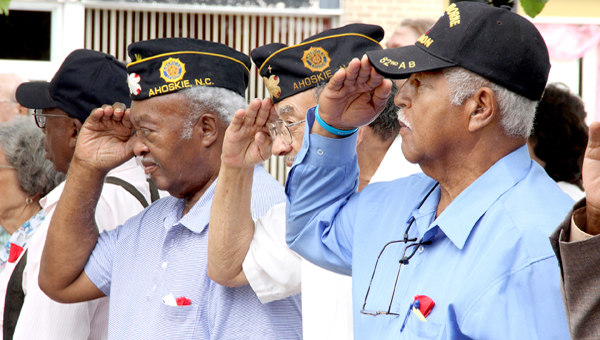 These military veterans stand and salute during the playing of “Taps” at Monday’s Memorial Day ceremony held at No Man’s Land Park in Ahoskie. Staff Photo by Cal Bryant

AHOSKIE – An empty chair during the holiday; another missed birthday…..the sights and sounds of loved ones who will never return.

Those reminders were vivid in the minds of those attending Monday’s Memorial Day ceremony at No Man’s Land Park in downtown Ahoskie. Looking over a sea of miniature red, white and blue American Flags, guest speaker Jeff W. Joyner, Past Department American Legion Commander, reminded his audience that remembering fallen heroes once a year is not enough.

“The widows, widowers, fathers, mothers, brothers, sisters and children remember every day,” said Joyner, who hails from American Legion Post 147 in Rockingham. “The voice of a loved one heard only as a distant memory is a constant reminder that they are gone, but there are others who can enjoy time with their families because of the sacrifices that others have made.”

Joyner stressed that by the time the last remaining troops returned home from Iraq in December of last year, nearly 4,500 of their comrades lost their lives in that conflict.

“We continue to lose American heroes every day in Afghanistan, in military training accidents and in missions around the world,” he said. “The loss to their families, friends, fellow service members and country is permanent. Some were only teenagers and most of those killed were under age 25. In the eyes of their loved ones they are forever young.”

The price for our freedom has come at an extreme cost. From the American Revolution to the Global War on Terrorism, one million American men and women have made the supreme sacrifice.

“They died so that we could continue to cherish the things they so loved – God, country and family,” Joyner stated. “That is why we are gathered here on Memorial Day, to honor the memory of our fallen warriors who have given everything for their country.

“We are also reminded on this day that in each generation, brave men and women will always step forward to take the oath of allegiance as members of America’s armed forces, willing to fight and, if necessary, die for the sake of freedom,” Joyner added.

And why would a man or woman lay down their life? Joyner, who served in the US Navy during the Vietnam War, said it was necessary to provide for a strong national defense; for the core values all Americans hold near and dear to their hearts (family, patriotism and religious heritage); and to allow children to grow up in an America that is strong and free.

Following the ceremony, guests were invited to Post 102 for refreshments.