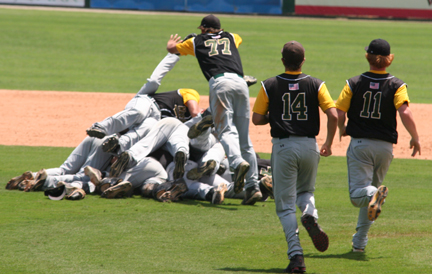 WILSON – It’s a case of numbers.

It was the Warriors’ third win over the Chargers this season having taken a 6-5 victory back in March at Merry Hill and then topping them 11-1 in the opening round of the championship series on Friday.

Not only did it complete the ‘drive-for-five’ but this was also Lawrence’s eighth title series in a row. The Warriors (26-8) have won it five of those eight years.

If this were a movie it would have the same ending – kind of like “Groundhog Day” where the same thing kept happening over and over again.

But no one’s complaining.

“Oh, man, this feels so good,” said senior outfielder Robert Thompson as the Lawrence players got up from the ground after they made another victory dogpile atop the stadium pitcher’s mound. “I’m trying not to cry.”

But there’s no crying in baseball, remember? That’s from another movie, ‘A League Of Their Own’, which also sums up Lawrence baseball quite nicely.

“It’s been a real good run,” he added of his tenure with the team. “I really enjoyed it and I’m going to miss it a lot.”

Off to the side and beaming like the proud architect that he was having assembled all this success, was Warrior coach Robert Kravitz.

Maybe they should rename Fleming Stadium ‘Kravitz’s Cave’ because every time he emerges from the place he’s carrying some form of championship hardware.

As pictures were being posed and fans and parents snapped away, Kravitz and Thompson shared a hug as the pupil whispered something to his teacher.

“He said ‘I love you coach, thanks for everything you’ve done.’,” Kravitz said, sharing the moment amidst the clicks and flashes. “That’s what makes it so special.”

If this year was special – and they all are – it may have been that Kravitz kept his team motivated to get back to another spring weekend in Wilson. The two days began with Friday night’s semi-final win over Faith Christian of Rocky Mount.

Friday afternoon Warrior pitcher Darren Armstrong shut down Faith’s offense in a 9-1 win; throwing a complete game shutout where he allowed one hit and struck out eight.

The loss eliminated Faith from the playoffs for the fifth straight year courtesy of Lawrence’s arms and bats. Later in the evening, the Warriors dispatched Wayne Country Day 11-1 in the first game of the best-of-three championship series.

Saturday they wasted little time taking control of the title match; putting up five runs in the first inning and causing the contest to be shortened to five innings with the dozen-run victory margin.

Lawrence batted around in the premier frame. Thompson began things with a base hit, followed by Ryan Lilley drawing a walk. Jim Porter then reached courtesy of a dropped fly ball by the Chargers centerfielder before Cody Ambrose doubled to post the first two runs of the game.

Darren Armstrong delivered Porter for a 3-0 lead while the fourth run came courtesy a sacrifice fly off the bat of Zach Eubanks. Perry Wynns and Tyler Brickhouse had back-to-back base hits that plated another run as Lawrence ended the first half-inning with a 5-0 lead.

Three more runs went up on the board in the top of the second: Lilley opened with a single to right and Porter followed drawing a base-on-balls.

A double-steal put both runners in scoring position before Ambrose tripled to the signs on the center-field wall and produced two more runs. An Armstrong sacrifice scored Ambrose and made it, 8-0.

Lawrence’s lone run in the third inning came when Lilley got a two-out base-hit and scored on Ambrose’s second double of the game.

The Warriors sent nine men to the plate in the fourth and got four more runs, though two of them came courtesy of WCDS errors.

Ambrose finished the game with a triple and a pair of doubles and five Lawrence runs batted in. Ryan Lilley and Darren Armstrong were both 3-for-3 with Armstrong driving in a pair.

Dallas Belch got the start – and the win – on the mound. He gave up just a first inning hit while walking two and striking out four in four innings of work.

Wayne Country Day avoided the goose-egg by pushing across a single run in the bottom of the fifth inning; but because they couldn’t muster four more across the plate, the game was called after five with the Warriors finishing with seventeen hits.

“We always find a way to hit the ball really well,” said Kravitz. “The score doesn’t reflect it, but it’s a struggle to get here and we’ve been really lucky to have the players and the coaches to do it.

“It gets better every year,” said Tyler Brickhouse, one of five Lawrence seniors along with Thompson, Porter, Luke Leary and Walker Jennette. “We played over thirty games this year and I’ll bet every one on the team played in half of them.”

“I’m just glad to be part of the legacy,” said Eubanks.

“We’re a legend here,” he added, nodding toward the ball field. “It’s good to be known for doing something special.”

GATESVILLE – His name is Stone, and he was rock solid. Loy Stone of Voyager Academy went 2-for-3 at the... read more