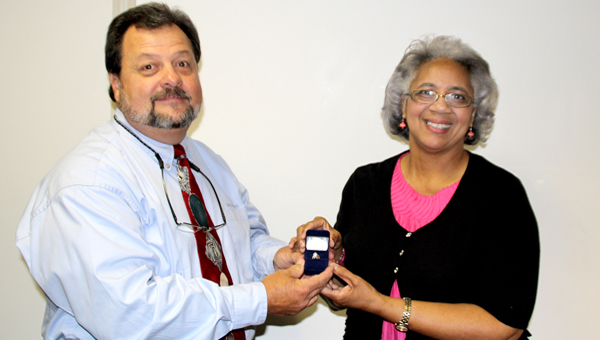 Lorraine Holloman accepts a new diamond ring from Roanoke-Chowan Publications Publisher Joe Cowart. The ring was the grand prize in a Mother’s Day contest conducted by RCP and other local merchants. Staff Photo by Cal Bryant

AHOSKIE — After more than a decade of trying, Lorraine Holloman of Ahoskie finally got the phone call she had been waiting for.

The annual Mother’s Day contest sponsored by this newspaper is now in the history book. Over 1,000 entries were received (1,061 to be exact), each vying for the grand prize – a diamond ring.

On Friday of last week, Roanoke-Chowan Publications staff conducted a random drawing for the ring. Reaching inside a box stuffed full of entries, Holloman’s name was drawn.

“I’ve been playing the Mother’s Day contest each year for the past 15 years and I finally got lucky,” said Holloman, a veteran employee of the Hertford County Department of Social Services.

In addition to the grand prize winner, nine others also claimed prizes, each selected from the contest boxes displayed at the following merchants who took part in the contest:

The News-Herald: Tony Marra of Ahoskie;

Terry’s Used Cars of Ahoskie: Sherrie Eley of Murfreesboro; and