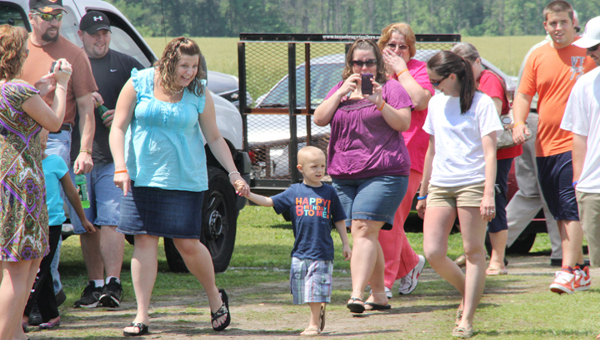 Four-year-old cancer patient Caleb Ivey is joined by his entourage – including his mother, Kimberly Sawyer (left) and Cara Cauldwell (right, in white t-shirt) of the Roc Solid Foundation – as he enters the backyard of his Conway home to see a play set built in his honor by the Foundation. Staff Photo by Cal Bryant

CONWAY – Typical of a four-year-old, Caleb Ivey had plenty of presents to open in celebration of his fourth birthday here Saturday.

One, which didn’t need to be unwrapped, was a big surprise.

Ivey – the son of Kimberly Sawyer of Conway and Samuel Ivey of Ahoskie – suffers from Acute Lymphoblastic Leukemia (ALL), a form of cancer. To help Caleb instill a sense of hope for his medical future, the Roc Solid Foundation, based in Chesapeake, VA, sent a small army of volunteers to erect an outdoor playground for the local youngster.

“Today is about Caleb and his family,” said Cara Cauldwell of the Foundation. “This is a very adult thing he’s going through right now. We hope having this play set in his yard will help him enjoy just being a kid. The physical and psychological benefit for Caleb and his family is great.”

Cauldwell’s boss, Eric Newman, knows all too well about what a child endures when it comes to treating cancer. Newman, now in his late 20’s and the founder of Roc Solid in 2009, is a pediatric cancer survivor who is now a building contractor.

“Eric had liver cancer at the age of three,” Cauldwell said. “They removed about half of his liver at that time and didn’t give him much of a chance to survive. He made it.”

Later in life, Newman decided to give something back by first conducting a fundraiser for CHKD (Children’s Hospital of the King’s Daughters, located in Norfolk, VA)

“From there Eric decided he wanted to do more,” Cauldwell said. “With him being a building contractor he decided to build play sets for kids with cancer. He’s been there before. He has this in his heart to give back.”

While the faces of the young recipients are filled with smiles upon using the play sets, their parents also benefit from the Foundation’s generosity.

“This is for the family,” Cauldwell said. “It eases some of their burden….the round-trip travel to CHKD alone in Caleb’s case is three hours weekly. They don’t have a lot of time for luxuries. This play set is now right outside their back door. It allows Caleb to be a kid.”

“This means so much to us,” said Caleb’s mom. “We don’t have a lot to give him, but we want to give him the world because he’s been though so much in such a short period of time. Any mother wants to do that for their child.”

Sawyer thanked the Foundation and all those involved with the project.

“These people are great,” she said. “Plus it gives me hope that Caleb can beat this, knowing that Mr. Newman beat cancer when he was young. It gives me the strength to go on, to do whatever is necessary to help my little boy.

“At times I feel I’m at my breaking point and can’t go on,” Sawyer continued. “Sometimes I just want to cry, but I never do it in front of Caleb. He knows he’s sick, but he doesn’t understand what’s wrong with him and that’s a good thing.”

Other than a noticeable lack of hair, those meeting little Caleb for the first time would not realize he has cancer.

“He’s strong, he’s like a little soldier….he’s always been that way,” Sawyer stated. “He doesn’t have time to give up.”

Based upon tests performed on Caleb at CHKD, Sawyer said her son undergoes chemotherapy treatments every 10 days.

“It’s a three year treatment plan,” she said. “Depending on what the results are when they do the bone marrow tests and spinal taps they may require him to come in every seven days for chemo.”

Caleb was officially diagnosed with ALL in September of last year. He initially complained with his legs hurting, but Sawyer first thought that was due to the fact that he had been outside playing all day.

“I thought maybe he had pulled a muscle,” she recalled. “The next day he started showing flu-like symptoms. By Sunday morning he couldn’t walk and he couldn’t stand for anyone to touch him. He was hurting so bad that he was put on a morphine pump when arriving at the hospital.”

ALL is most common in childhood with a peak incidence at 2–5 years of age, and another peak in old age. The overall cure rate in children is about 80percent, and about 45-60 percent of adults have long-term disease-free survival.

On Saturday, after the initial shock of seeing his play set for the first time, Caleb became a bit shy…perhaps due to the large number of strange faces in his backyard. He found refuge within an open-windowed playhouse at the top of the steps….peeking out at the crowd ever so often.

Caleb Ivey shares a ride on a “surfboard” swing with his cousin Senae McNeil. Staff Photo by Cal Bryant

“Seeing the look on Caleb’s face when he first walked back here was a rush for all of us involved,” Cauldwell noted. “Caleb is a cool kid. Just seeing his sweet little face made getting up at 6 a.m. on a Saturday morning and driving to ‘Carolina all worthwhile.”

On their dime, the Foundation sent Caleb and family members out to breakfast and then for a round of bowling in nearby Franklin, VA on Saturday morning in order for the volunteers to erect the pay set prior to the family’s 12 noon return.

“When kids are initially diagnosed with cancer they’re usually in a hospital within the first 24 hours for their first treatments. Parents do not typically have time to go home and pack a bag to prepare for that initial stay at a hospital. We have bags at the hospital packed with toiletry items that they’ll need to stay,” she explained.

Cauldwell said the playground built for Caleb was one of two models constructed by the Foundation. The playgrounds are actually a kit….basically the main structure is pre-assembled off-site the night before the team arrives at the home of the recipient.

“In this case the pre-assembly was done Friday night in Chesapeake,” she noted. “In some cases we’ll develop a relationship with a local partner, a local sponsor, close to the site and perform the pre-assembly there.”

The Roc Solid team arrived at Caleb’s home at 8 a.m. on Saturday. Three and one-half hours later the project, the 30th in the Foundation’s brief history, was finished as they stood in the shade awaiting his arrival.

Among the army of volunteers was a group representing ACT Nursing, a Portsmouth, VA company that served as the sponsor for Caleb’s project.

“Eric is a friend of mine; this is our third build with them and we’ve enjoyed each outing,” said Dayna Shearin with ACT Nursing. “This particular build really hit home with us. We helped a family without a lot of financial means. This being Caleb’s birthday was also special, it meant a lot to us to be here to share his special day.

“It was meaningful for us to make this trip here, it gave us a sense of the distance this family has to travel every week for Caleb’s medical treatments,” she added.

Opened in 1995, ACT Nursing is a long-term care pharmacy, delivering medicine to assisted living homes in the Hampton Roads area.

The effort for Caleb was the second “build” by the Foundation in North Carolina. Cauldwell said the organization is reaching out even more to assist young cancer patients. The group has a “build” in Tennessee in two weeks and has reached previously into northern Virginia.

The Roc Foundation learns of young cancer patients that may benefit from a play set through the Child Life Specialist at CHKD.

“The families are made aware of our services through CHKD; from that point there is an application process to go through,” Cauldwell said. “We usually find out what our next project will be about one month out from the actual build.”

The Roc Solid Foundation is built on the philosophy that through positive action and community cooperation, encouragement and hope is fostered for those facing the direst of circumstances and helps them cope with the difficult reality of living with childhood cancer. All of Roc Solid’s programs are built on the understanding that a smile is the best medicine.

Each play set built by the Foundation not only rewards a child for their courage and perseverance in their battle with the illness, it also provides them with a bridge to dissolve social awkwardness among their peers due to the effects of the disease and its tolling treatments.

For more information or to make a donation, visit www.rocsolidfoundation.org.