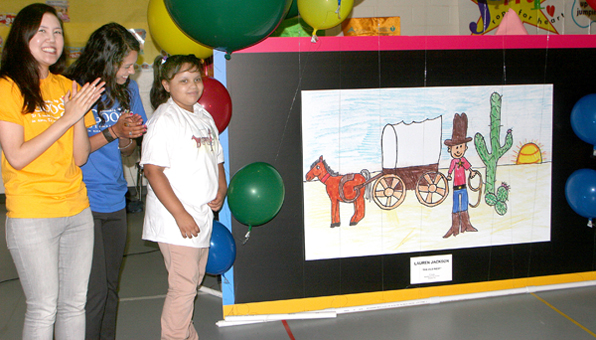 Her mother, Marlo Jackson, decided it was time to put that talent to good use.

“She doodles and doodles all the time and wastes notebook paper,” said Marlo Jackson. “I said let’s enter this contest and see what happens.”

Lauren Jackson decided to enter the Doodle 4 Google contest and of 144,000 entrants, she is one of the 50 state finalists. She is a third grader at Bearfield Primary School in Ahoskie.

Wednesday morning, representatives of Google were among a room full of people at Bearfield who celebrated Jackson being chosen as the elementary school level winner for North Carolina, which earned her the right to compete for the top prize nationally.

That group of dignitaries was joined by the second and third grade classes of Bearfield as Jackson received recognition for her excellent work.

Evelyn Lee and Joelle Murphy of Google announced to the students that one of their own had been chosen as a finalist for the national competition. The two then took time to give information about the competition.

This year’s theme is “If I could travel in time, I’d visit…” Jackson chosen the old west and drew a wagon scene that included a person with a rope and a desert setting complete with a cactus.

Lee then introduced Jackson as the winner to thunderous applause from her classmates.

Butterfield offered his congratulations for the youngsters’ achievement. The congressman said he was “a Google fanatic” and he was pleased to be part of the celebration.

“Doodle 4 Google is a national program and Lauren has enrolled in the program and risen to the top to become a super hero,” Butterfield said. “I am delighted to be here with you on such as good day.”

Butterfield then presented Jackson with a mouse pad and t-shirt, both of which bear the logo of the executive residence of the White House.

Jackson then came to the podium and said she changed her mind several times before choosing her final design.

Her work will be displayed in New York where the finals are held as well as displayed at the Bechtler Museum of Modern Art in Charlotte.

Lee and Murphy told the students how they could support their classmate. They said people could go to the Google home page and search for Doodle 4 Google. The state winners should be the top result and a vote can be cast only once from each computer.

If chosen, Jackson could receive a $50,000 technology grant for Bearfield as well as a $30,000 college scholarship.

“I’m so very proud of her,” Bearfield Principal Julie Shields said. “She is a smart person and deserves this recognition. She’s a great child.”

Jackson is a student in the class of Gretchen Zoch.

Doodle 4 Google is one of several efforts by Google to encourage and celebrate the creativity of young people asking students across the country to create their own Google doodle. They received thousands of submissions from all across the US.

AHOSKIE — A game that was tight for the first four innings saw the number one seed Warriors of Lawrence... read more