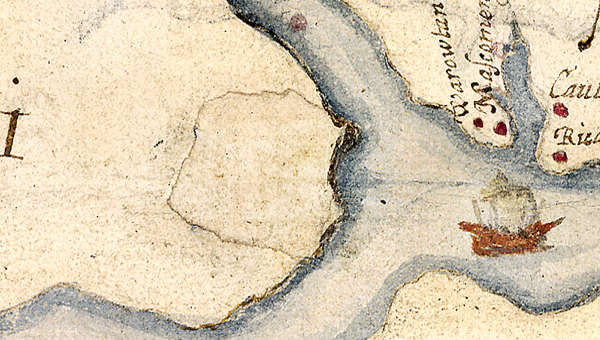 The outlined area in the center of this map shows what is now southeastern Bertie County, an area where researchers believe the English settlers from the famed Lost Colony relocated in the late 1500’s. Photo courtesy of the British Museum

CHAPEL HILL – Did the Lost Colony end up in Bertie County?

Officials with the British Museum and the First Colony Foundation have made recent discoveries that lead them to believe that may actually be the case.

This morning (Thursday), the group will announce that after decades of searching, archeologists may have the best evidence yet of the fate of Sir Walter Raleigh’s “Lost Colony.” The event, which will be held at UNC’s Wilson Library, can be viewed live at 10 a.m. by webcast at http://carolinaunion.unc.edu/live.

The clue comes from a 425-year old map drawn by Raleigh’s expedition to establish the first English colony in the New World. Scholars from the First Colony Foundation and the British Museum have discovered a dramatic fort symbol under a “patch” on the map in the area of what is now Bertie County.

The patch, which may represent Sir Walter Raleigh’s planned “Cittie of Ralegh” and perhaps even the eventual site of the second colony he sent to the new world in 1587, is over what would be the area between the Eden House Bridge (U.S. 17) and the mouth of the Roanoke River.

“We have endured tornadoes, hurricanes and floods,” he continued. “This is good news and we’re excited about the possibilities. It’s too early to say yet what those possibilities are, but it is an exciting announcement.”

The second colony, led by John White as Governor, consisted of 118 men, women and children and was initially settled on Roanoke Island. White sailed back to England for supplies and the colony was missing on his return.

The patches on portions of the late 16th century map owned by the British Museum have recently been examined and reveal hitherto unseen lines and symbols that were hiding for centuries.

The British Museum said a variety of non-contact scientific methods, which were safe with the paper, allowed researchers to peer at and through the two patches of paper which has been applied to the map of modern eastern North Carolina and Tidewater Virginia.

According to officials, the first patch appears to be simply to allow the artists to modify the coastline. The second, which is the one over Bertie County, appears to cover a large “fort” symbol in bright red and blue. It also has a faint – barely visible to the naked eye – small version of a similar shape on top.

There is also a red circle under the patch that may represent an Indian town. The map was drawn by John White.

Scholars of the North Carolina-based First Colony Foundation, a non-profit group utilizing archaeology and historical research to learn more about what are called the Roanoke Voyages, note that one of the altered portions of the map is an area explored by Raleigh’s colonists in 1585 and 1586 and where the 1587 “lost colony” may have tried to resettle.

The English had hoped to set up a series of outposts linking their territory, called Virginia in honor of Elizabeth I, northward to the James River, where a later generation established Jamestown, the first permanent English colony.  First Colony Foundation researchers believe that it could mark, literally and symbolically, “the way to Jamestown.” As such it is a unique discovery of the first importance.

The First Colony Foundation will offer its interpretation of the altered areas and the reasons behind the changes.   First Colony is preparing to develop new research programs, historical and archaeological, to explore this fascinating and mysterious period of early American history.

The Roanoke-Chowan News-Herald, who is the first to break the story, will provide more details on the historic discovery in an upcoming edition.

WINDSOR – The Bertie County Board of Education has approved the calendar for the upcoming school year. The calendar begins... read more