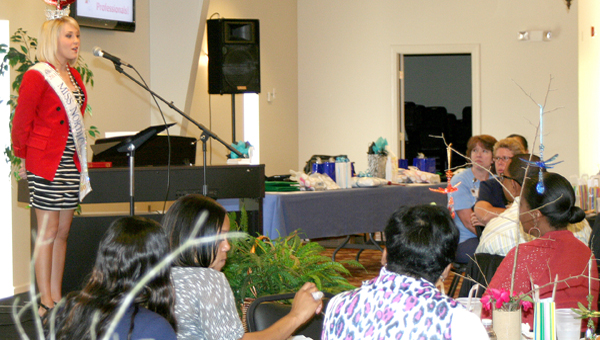 AHOSKIE – Administrative professionals were in good company here on Wednesday as Miss North Carolina joined them in recognizing their hard work.

Goldsboro native Hailey Best, the current Miss North Carolina, was the guest speaker for the annual Administrative Professionals Day held at Carpenter’s Shop Church. The event, presented in two sessions, was sponsored by Ace Hardware of Ahoskie, the Roanoke-Chowan News-Herald, the Ahoskie Chamber of Commerce and the Small Business Center at Roanoke-Chowan Community College.

“I understand the hard work that you do and it’s not always fun, but it’s very rewarding,” said Best to the audience.

Best worked part-time as an administrative assistant in the President’s office at Meredith College in Raleigh, where she is currently majoring in vocal performance. She is also a professional entertainer for the NC Opera Company and the NC Theatre and does commercials for the Talent One Agency.

“I understand now, being on the other side of it, that without my business manager, without my director, without my sponsorship donation coordinator—I couldn’t do this job (Miss North Carolina),” she said. “I have such a great team behind me, even my prep team from Miss America and my parents included, have all been like my administrative professionals helping me do this job.”

She continued by saying, “What you do is so important for the people who are the managers and the CEOs of your companies because they can’t do this alone.”

Best was a top 15 finalist among the 53 young women competing at the 91st annual Miss America Pageant held earlier this year in Las Vegas.

During her time before the audience, Best also spoke about her experience in the pageant (including her 14 hour days) and her journey to becoming Miss North Carolina.

Best said competing for Miss North Carolina has been one of her dreams since childhood. The college sophomore won the coveted title on her first try on the state level competition, a rare feat for a contestant.

“Honestly, the people that I’ve met have meant more than any appearance that I’ve done,” she said.

She said the role of Miss North Carolina is about serving others.

“It’s about making every one else feel more special than you do,” she said. “It’s about understanding that you have to sacrifice in order to serve others and that it’s one year of sacrifice for a life full of being changed.”

During her time in Ahoskie, Best visited employees at ACE and spoke to the Roanoke-Chowan News Herald about her work through the “Live On” Foundation.

“We go into children’s homes and homeless shelters and even battered women’s shelters and find children who live in an alternative residences and basically meet the children, create trusting relationships with them, find their interests and their strengths,” she said. “We then go into their communities and find them extracurricular activities in whatever they’re interested in. …It’s kind of a good outlet for them to get out of what they’re used to.”

Best said through the foundation, she’s traveled the whole state visiting with many children.

Her interest in helping children started when she was just a child herself. Best said when she was eight years old she began to volunteer with the Masonic Children’s Home in Oxford.

“I just fell in love with those kids,” she said.

As for the future after Miss North Carolina, Best hinted at the Administrative Professionals event that she has been offered some music opportunities in New York City and a television show in Los Angeles.

Best’s ultimate goals include earning a master’s degree in education and become a college vocal professor.