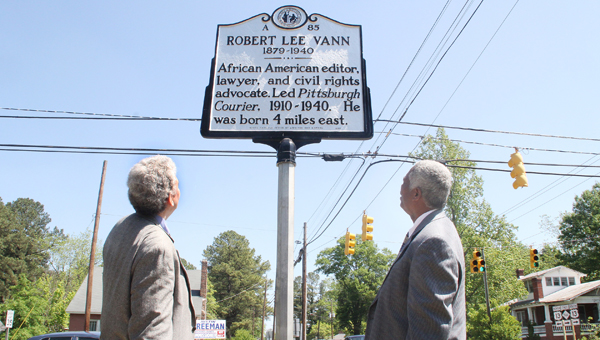 AHOSKIE – The proof is now officially documented for all to see.

The life and legacy of Robert Lee Vann stands tall at the intersection of Academy Street (US 13) and First Street (NC 561) in Ahoskie where a state historical marker in his honor and memory was formally dedicated Friday morning.

Vann, a publisher, lawyer, businessman and civil rights leader of national reputation, was born and raised near Harrellsville, but a school that bears his name is in Ahoskie.

Marvin Jones, Executive Director of the Chowan Discovery Group, emceed Friday’s event, often finding his voice doing battle with the busy US 13 traffic, including heavy and loud trucks. Jones helped lead the effort to have Vann’s historical marker erected as his organization continues to preserve, document and research the history of the tri-racial people of central Hertford County and beyond.

“A great part of researching the legacy of Robert Lee Vann is to consider the hardships he grew up with in Hertford County at that time,” Jones said. “He was fatherless, his mother was a cook and the presence of the financial means necessary to send him to school was sorely lacking.”

Jones noted that it wasn’t until Vann began working for the Postmaster in Harrellsville that his life began to change.

“He got that job because he showed initiative,” Jones remarked. “He made a good impression on those who could help him. He took that and was able to attend Waters Training School, but it meant him walking from his home in Harrellsville to Winton to attend school.”

Jones said that Vann’s mentor in Winton, the legendary Dr. C.S. Brown, raised funds to allow Vann to remain on campus, thusly ending his long commute by foot. Brown also helped pave the way for Vann to attend Virginia Union College. Vann used that education as a stepping stone to attend the University of Pittsburgh from where he obtained a law degree and later became the publisher of the Pittsburgh Courier. Twenty-five years later, the Courier was nationally distributed with a circulation of a quarter of a million copies. It was a leading voice calling for equal rights for all Americans.  The Pittsburgh Courier is now 112 years old.

Additionally, Vann was appointed to serve Assistant to the Attorney General in the Department of Justice during the administration of U.S. President Franklin D. Roosevelt.

Many of those in attendance at Friday’s event – which included a large contingent of R.L. Vann School alumni – were appreciative of Jones’ efforts, including Ahoskie Mayor Brien Lassiter.

“Here in Ahoskie we’re glad to recognize and preserve history,” Lassiter said. “I attended Robert L. Vann School when it was an elementary school and have fond memories of those times. Those buildings seem to be in better shape today than when I was in school.

“We’re here to honor and memorialize Robert L. Vann for the things he accomplished, both here in Ahoskie and Hertford County and beyond our little corner of the world,” Lassiter added. “Not just for the black community, but for our entire community, in our state and in our nation. Seeing this history preserved is very important. We need to learn from our history so we can grow and prosper.”

“We are thrilled to share in the awesome occasion,” Stephens said. “As you know, Dr. C.S. Brown was Robert L. Vann’s mentor and teacher. The word of God tells us to train up a child in the way he should go and when he old he will not depart from it. We must be obedient and continue to train just as Robert L. Vann and Dr. Brown did in the past. We must continue to teach and train our children.”

Two former presidents of the R.L. Vann School Alumni Association – Dennis Deloatch and Annie Mobley – noted the educational legacy left by Vann.
“What a great day for R.L. Vann and for those that graduated from R.L. Vann School,” said Deloatch, also a current member of the Hertford County Board of Education who assisted Jones during a three-year process to have the historical marker erected.

“It’s also a great day for Hertford County as R.L. Vann was a product of this county,” Deloatch continued. “What a great day for Ahoskie as this school was established here, first for people of color.”

Deloatch referred to Vann as a man of vision.

Mobley, who serves District 5 in the North Carolina House of Representatives, was proud to recall the legacy left by Vann. She told of a trip to Pittsburgh where she was able to see Vann’s fingerprints on his newspaper – the Courier.

“He’s no longer there, but his memory is there,” Mobley said. “It was interesting to learn what he did as a newspaper publisher. We should be proud to know that this man came out of Hertford County. He left his mark, he planted his mark. I can’t think of a better person than R.L. Vann to be remembered in this way through this marker.”

Linda Eure of the North Carolina Office of Archives, the organization responsible for the markers statewide, said Vann’s historical tribute is now added to a list of over 1,500 such markers across the state.

“While Mr. Vann spent most of his life in Pittsburgh, we want to remember him in his home state,” Eure noted. “It’s my hope that this marker will play a part in ensuring that Robert Lee Vann’s memory is recognized and remembered for many generations to come.”

This is the first historical marker to be erected in Ahoskie since 1955. That one stands exactly one block southwest and salutes the establishment of the Ahoskie Corn Club, the predecessor of what is now 4-H across the state. Seventeen other such markers are erected throughout Hertford County. Information about all historical markers across the state can be found online by visiting ncmarkers.com.

The latest historical marker dedication is the third in six months as nominated by Chowan Discovery Group. The other two CDG-nominated markers are for the ancient town of Choanoac (Chowanoke) outside of Harrellsville; and for the soldier, legislator and inventor, Parker David Robbins, located in Magnolia, NC.

For more information about the Chowan Discovery Group, visit www.chowandiscovery.org or call Jones at 202-726-4066.