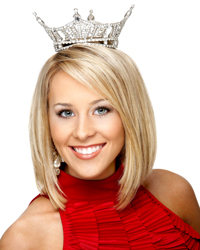 This special day is set aside annually to recognize the work of secretaries, administrative assistants, receptionists and other administrative support professionals.

Locally, these individuals will be praised for their daily work and hear from Best, a Goldsboro native who is now a sophomore at Meredith College in Raleigh where she is majoring in Vocal Performance.

“We are pleased to welcome Hailey to Ahoskie and are looking forward to her sharing her story of success,” said Jamie Johnson, owner of Ace Hardware of Ahoskie, one of the event’s sponsors along with the Roanoke-Chowan News-Herald and the Small Business Center at Roanoke-Chowan Community College.

“This promises to be a grand event that recognizes the efforts of the many hard-working administrative professionals in our local area,” said News-Herald Publisher Joe Cowart. “We encourage their bosses to allow those dedicated employees enjoy their special day and what better way to celebrate that day than to have Miss North Carolina help salute those efforts.”

Best, who was a top 15 finalist among the 53 young women competing at the 91st annual Miss America Pageant held earlier this year in Las Vegas, attended Eastern Wayne High School prior to graduating her senior year from the University of North Carolina School of the Arts.

She is now on her way to obtaining a Bachelor of Music degree in Vocal Performance, a Master of Education degree, and to one day become a college vocal professor.

Currently, Best is a professional entertainer for the NC Opera Company and the NC Theatre; does commercials for the Talent One Agency; and serves as a part-time administrative assistant in the President’s office of Meredith College.

As far as her role as Miss North Carolina, Best said, “I truly hope to be remembered as having ‘the tie that binds’ the people of North Carolina together in a way that embraces and enriches the lives of the many homeless children in our state.  Sizeable fundraising efforts will also be remembered for the “Live On” Foundation, as well as for the Children’s Miracle Network.  Lastly, but certainly not least, I will be known for volunteering and guiding the citizens of North Carolina with new and fresh ideas in order to become an even better state.”

According to wikipedia.org, the idea of what is now Administrative Professionals Day began with Mary Barrett, president of the National Secretaries Association, now called the International Association of Administrative Professionals, and C. King Woodbridge, president of Dictaphone Corporation. They served on a council addressing a national shortage of skilled office workers. Together with Harry Klemfuss, public relations account executive at Young & Rubicam, they originated the idea for a National Secretaries Week.