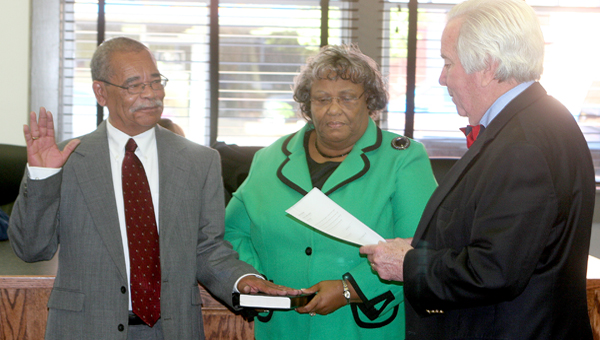 WINDSOR – The town of Windsor is fully represented again.

Thursday morning the Windsor Board of Commissioners appointed Lawrence Carter Jr. as the newest town commissioner. He was chosen to replace the Rev. Hoyt Cooper, who resigned from the board following his move to Winston-Salem.

Windsor Mayor Jim Hoggard put together a committee to search for the appropriate replacement for Cooper and the group discussed the vacancy with several citizens before settling on Carter.

During their regular meeting Thursday morning, Hoggard recognized Commissioner Bob Brown, who chaired the committee to discuss the group’s findings.

“The mayor, Commissioner David Overton and I met and went through several names,” Brown said. “I feel we picked out the best candidate. I would like to nominate Lawrence Carter Jr. for the post.”

Hoggard accepted the nomination and asked the board if there were other names the group would like to offer.

“I think we have the best candidate already nominated,” Commissioner Joe Alexander said.

Hoggard said the town charter called for a roll call vote of the members of the board and started with Commissioner Cathy Wilson, who voted in favor of the appointment. The other three sitting board members echoed her vote, leaving Carter the unanimous choice.

Carter then rose and was joined by his wife, Hilda, as he took the Oath of Office from Bertie County Clerk of Superior Court John C.P. Tyler.

“I applaud you on your choice,” Tyler told the board after administering the oath. “He was an excellent magistrate and I’m sure he will do an excellent job for the town of Windsor.”

Hoggard called a recess at which time Carter was greeted by the many family and friends who had come to wish him well along with his fellow board members.

Carter served Bertie County for just over two decades as a magistrate before retiring in February of 2011.

He said he was honored to be chosen for the position and said his father had once sought election to the town board before falling ill.

When asked about serving on the board his father had sought, Carter said he “felt great about it.”

Carter said it was too early for him to have an agenda as the town’s newest board member and that he expected to spend time learning and then see what areas he would seek to offer assistance.

Carter is the second board member appointed to the town commission this year. Wilson was appointed in March to replace the late Collins Cooper.

Both Carter and Wilson will serve in their current appointed positions through November of 2013 when there will be a special election to fill the remaining two years on the terms of Collins Cooper and Hoyt Cooper. The appointees may seek election to the terms at that time.

WINDSOR – The bulk of the 2012-13 allocation for Bertie County’s Secondary Roads Construction Program will be set aside. During... read more