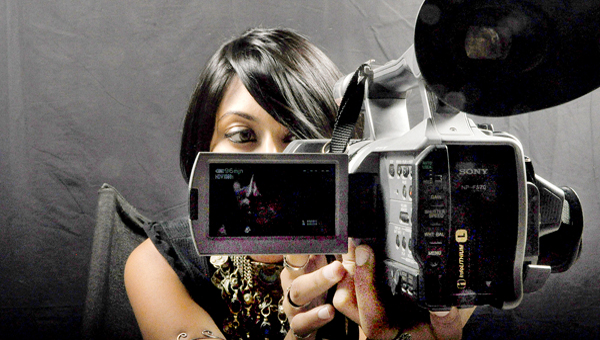 AHOSKIE — No matter the storyteller’s background, stories have a unique way of being universal.

Last week that lesson hit home for a group of Hertford County High School students by way of Pakistani film maker and writer Iram Parveen Bilal.
During a visit to David Duncan’s digital media class and John Johnson’s history class, Bilal spoke about a variety of topics from traditional Pakistani clothing and the Urdu language to her passion for dance and her most recent feature film, “Josh”

The film’s title means “passion” or “drive” and is currently being edited by Jochen Kunstler, a resident of Como. Bilal shared a couple film clips from the movie with the classes.

“Josh” follows the story of a privileged Pakistani girl, Fatmia, and her friends who set out to solve the murder of Fatmia’s nanny, the woman who essentially raised her.

“She (the nanny) means every thing to Fatmia,” Bilal said.

The film explores a variety of themes, including education, patriotism and class statuses.

In “Josh”, Bilal also explores and tells the stories of everyday people making a difference in Pakistan.

“Who has heard the word Pakistan before, raise your hand,” Bilal asked the students. “I’m not surprised what context you’ve heard it in.”

Bilal said it was important to understand that despite what people hear about Pakistan along with all the violence and chaos, everyday life still goes on.

“What’s very important to realize is that people are still living a life, they are still going to school, they’re still teaching, they’re still trying to make a difference and that is what this film is about,” she said.

Born in Chicago, Ill., Bilal was raised in Nigeria and Pakistan. According to Bilal’s web site, she returned to the United States to study at the California Institute of Technology where she received a bachelor’s degree in Environmental Science Engineering.

“I am an engineer, but then I decided I wanted to be a storyteller,” she told the students.

Bilal was awarded the Thomas J. Watson Fellowship, which took her all around the globe. Upon returning she earned her master’s of fine arts from the Peter Stark Producing Program at the University of Southern California.

In addition to speaking about her own work, Bilal also gave encouragement to the aspiring film makers, writers, comedians, actors and singers.

Bilal said, for her own writing and inspiration, she relies on her own experiences from her life.

“Each one of us on our own is a storyteller and where do those stories come from? They come from our experiences,” she said. “So if you want to be a filmmaker you have to maximize your experiences, your exposure to interesting things and that’s where your stories will come from.”

Bilal was accompanied by Hertford County native Caroline Stephenson to the classroom.

Duncan, who teaches his students about filmmaking in his class, said the opportunity was a rare, but welcomed, one.

“This is an opportunity that does not present itself often and we are so grateful for Ms. Stephenson to have an offering for us,” said Duncan. “We have an opportunity today to experience culture from the other side of the world.”