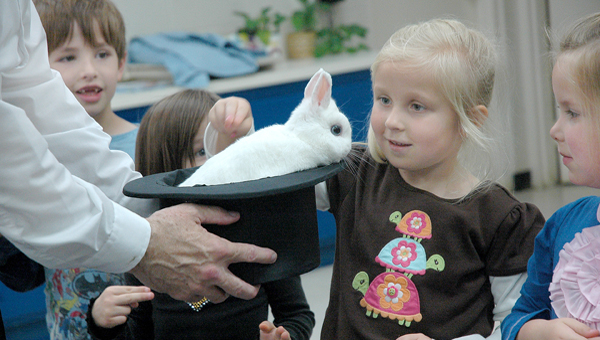 Ridgecroft School students were entertained and amazed by Rob Westcott and his magic workshop. Contributed Photo

AHOSKIE – Fond school memories are abundant for a lot of people.

Two Ridgecroft School parents decided to make sure that at least some of the wonderful memories they have of their time at the school can be shared by students currently attending the institution.

Anna Pierce and Cyndi Chamblee, both alumnae of Ridgecroft who are currently part of the Parent-Teacher Organization, led the reimplementation of Enrichment Week at the school last week.

“When I attended Ridgecroft School, Enrichment Week was a long-standing tradition that I looked forward to every year,” Pierce said. “I was really excited to reintroduce it. I do believe the students enjoyed and learned from these educational programs.”

The Ridgecroft School PTO headed the event which was a four-day affair where students learned about unique programs outside their normal routine.

“These programs and assemblies were carefully chosen to provide our students with an enjoyable and educational experience outside of the classroom setting,” Pierce said.

The week’s events kicked off on Monday morning with the JB Rattles Reptile Show. The event was for students in pre-Kindergarten through the eighth grade and offered a hands-on experience for the children. The students were allowed to touch and handle the reptiles.

Tuesday saw Kathryn Sellers present a tobacco prevention program as part of the Enrichment Week. Sellers is Deputy Director of the North Carolina Spit Tobacco Education Program. She works with students, schools and professionals to spread awareness about the dangers of smoking.

Rob Westcott, an award-winning magician and family entertainer presented “Reading is Magic/Magic Workshop” on Tuesday. All students from grades kindergarten through eight were part of the performance.

Wednesday saw Butch Flythe, an Ahoskie native, speak to students in grades 6-12 at the school. Flythe retired after 25 years of service as an Aviation Survival Technician/Helicopter Rescue Swimmer.

He spoke to the students about his work with the U.S. Coast Guard and talked about working as a rescuer during his career.

In addition, students in grades kindergarten through five were participating in a worm program provided by the Hertford County Cooperative Extension Office. Students learned what worms do underground, what they eat and how they move.

“I was extremely pleased with Enrichment Week,” Ridgecroft Headmaster Aron Martin said. “The Ridgecroft PTO and in particular Anna Pierce and Cyndi Chamblee worked tirelessly to give the students an educational yet entertaining array of assemblies.

“The students gained knowledge while enjoying learning in an unconventional atmosphere,” Martin added. “The entire week was well-planned and rewarding for all.”

The hard work was worth it according to both Pierce and Chamblee. Each said they were pleased with the week and glad to see it back a part of the curriculum at Ridgecroft.

“It was such a reward to see the smiles and excitement on the student’s faces and to hear such positive feedback,” Chamblee said. “It made all the effort and planning put forth in Enrichment Week worthwhile and meaningful.

“We want to thank the teachers for being flexible with their daily schedules and working with us,” she added. “It is truly an exciting time for Ridgecroft School.”