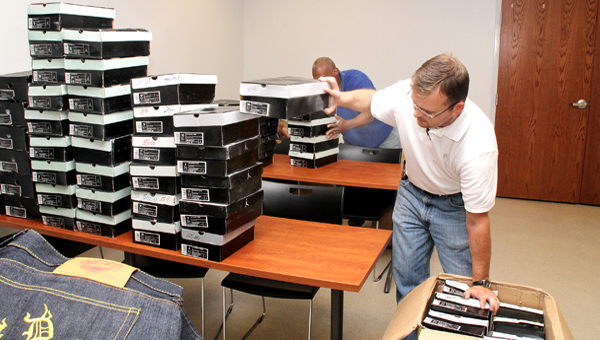 AHOSKIE – Counterfeit clothing and shoes seized by the Ahoskie Police Department from a Main Street business will be put to good use.

On Thursday, Ahoskie Police Chief Troy Fitzhugh and Lt. Jeremy Roberts were joined by Donnie Graham and Keith Melendez of the Soul Saving Station to move the apparel from the police department to the church.

“I found out that the Soul Saving Station here in Ahoskie was conducting a community event, part of which included giving away clothing to those in need,” Fitzhugh said. “We cleared all this through the court system, ensuring that it was okay to give this clothing and shoes to Soul Saving Station. We’re just adding to what they had already planned for the give-away.

“Knowing what that church is doing to help the community, helping needy adults and children, makes this all worth the effort,” Fitzhugh added. “It’s not for the church, it’s for the community.”

Fitzhugh said the items were held as evidence and once the case against the business owner was settled in Hertford County court, local Senior Resident Superior Court Judge Cy Grant signed the order for the items to be released by the Ahoskie Police Department and donated to a charitable organization.

The items included 181 pairs of sneakers and two tables stacked high with jeans, shirts, pull-overs, etc. Some were rip-offs of Ed Hardy Jeans, which would legally retail for $90 a pair.

“This really helps us, it adds to the clothing we already have ready to give away on Saturday,” said Graham, Assistant Pastor at Soul Saving Station.

Graham said the church conducts two community outreach days per year – one in the Spring and the other around the Thanksgiving holiday. The church also hosts a back-to-school event, donating supplies to local children.

“Our Youth Leader, Keisha Walker, and her whole family really enjoys staging these events where we come together to feed and clothed the community,” Graham said. “Anyone and everyone is invited.”

“We’re just continuing the legacy of (the now late) Bishop Melendez, who founded Soul Saving Station back in the 1970’s,” Graham said. “We look out for our community as well as conducting ministry programs at four or five different prisons.”

Both men said they were very appreciative of the donation of these items from the Ahoskie Police Department.

“There are many in our community in need of clothing,” Graham said. “These shoes and clothing will help meet their needs.”

This isn’t the first time the Ahoskie Police have donated seized items of clothing to a church. In earlier raids on counterfeit clothing stores, the APD turned those items over to New Ahoskie Baptist Church for distribution.

“There were probably twice as many items then than you see now,” said Roberts. “We seized so many items the first go-around that we had to rent a storage building just store it all.”

Roberts added that it is not illegal to purchase or wear counterfeit apparel, it’s only illegal to sell those items.

Students at Lawrence Academy’s Festival Latino demonstrate a dance for the crowd. The sixth annual event was one of the... read more