Love of the game 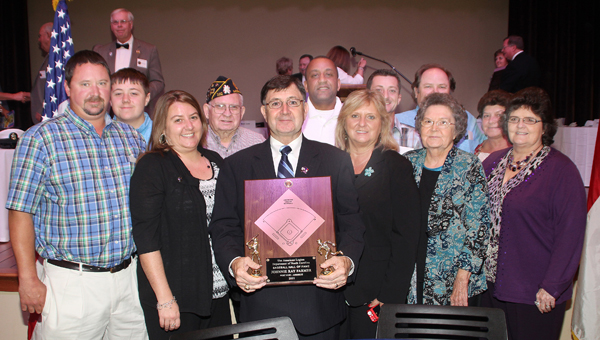 SHELBY – Like most young males of his era, Johnnie Ray Farmer dreamed of one day swinging a baseball bat for a Major League team.

Even though his life took him in a completely different direction, including a stint on the battlefields of a foreign land, Farmer’s dream as a child nearly came full circle Saturday night in the Cleveland County city of Shelby.

There the Millennium native was inducted into the North Carolina American Legion Baseball Hall of Fame during a festive banquet held in the Christian Life Center of Elizabeth Baptist Church.

Joined by a large contingent of family, military veterans and friends, Farmer took his place in this prestigious Hall, one reserved not only for former Legion baseball standouts on the field of play, but also for those men and women that work hard behind the scenes to give those players an opportunity to compete at such a high level of America’s pastime.

Farmer is one of the major “players” behind the current success of Ahoskie American Legion Post 102’s baseball. That athletic program, which gained national attention some 50 years ago as one that helped hone the skills of the now late Jim “Catfish” Hunter (who played with the Oakland A’s and New York Yankees during his Major League Hall of Fame career), went through 31 years of dormancy before Farmer and Post 102 Athletic Director Wayne Meeks breathed new life into the organization in 1996.

“With Johnnie’s help and guidance we were able to get Legion baseball started back at Ahoskie Post 102,” Meeks recalled as he formally inducted his friend and colleague into the Hall of Fame. “Johnnie gives us 110 percent of his time and efforts every year in baseball. He works hard, from doing all the announcing of our home games and is heavily involved in our annual fundraisers as well as the Legion Post itself.”

Meeks, through Farmer’s nomination, went on to be inducted into the North Carolina American Legion Baseball Hall of Fame in 2001. Meanwhile, Farmer kept up his efforts, serving as the announcer and scoreboard operator for Post 102’s home games. He also has held the positions of team secretary and treasurer for the past 15 years.

“Eleven years ago when I nominated Wayne Meeks for this very same honor I never imagined that I would be standing in this same spot one day,” Farmer said. “I’m truly honored. I’m also very humbled to be amongst those already in the Hall of Fame. When you read the book of those in this Hall of Fame and see names such as Trot Nixon (who played in the Major Leagues for 12 seasons, 10 with the Boston Red Sox) and ‘Catfish’ Hunter, it’s very humbling to be included on that list.”

Farmer recognized those who made the long trip to Shelby to be part of this special occasion, including several members of his family and Post 102 members.

“They’re not baseball players, but they’re my team,” Farmer stressed.

In a later interview, Farmer said he knew he was in a room Saturday night full of men and women who performed nearly the identical tasks he does with Post 102 baseball.

“So many do the same thing, work behind the scenes to do what’s best for our team,” he said. “We have a lot of men and women that volunteer a lot of time to Legion baseball, doing everything from collecting money at the gate, working the concession stand, announcing games and cleaning up after the game is over.”

Farmer said he was grateful to Meeks for nominating him for the Hall of Fame and for the decision reached by the state’s Hall of Fame Committee to select him for induction.

“Most importantly I need to thank our players at Post 102, their family members and our coaches – they’re the ones that make Post 102 baseball what it is today,” Farmer stressed.

“It’s all about the players,” he added. “When you see our former players go on to play in college, or have a chance to play professionally, or just those who succeed in life, it makes you feel what you’ve done along the way has made a difference. I’m glad they got something out of American Legion baseball. Maybe one day they’ll reach out and help those younger players who also love this game.”

Fish told the story of U.S. Navy Captain Charlie Plumb, a fighter pilot in the Vietnam War who was shot down on his 75th mission. He spent the next six years in a POW camp.

Years later, Plumb and his wife were enjoying dinner at a restaurant when he noticed a man at another table staring at him. That stranger came to the couple’s table and began reliving the past military history of Captain Plumb.

When Plumb asked the stranger how he knew so much about his life, the stranger said he was the person that packed Captain Plumb’s parachute on the day he was shot down.

Plumb knew at that moment he was talking to the man that saved his life that fateful day as without a parachute he would have surely perished in the ensuing crash.

“The moral of the story is do we know what guided us to this point of our lives,” Fish said. “To the ones being inducted into this Hall of Fame tonight, who got you to this point? Who packed your chute? Better yet, whose chute have you helped pack?

Along with his Hall of Fame plaque, Farmer was presented with a lifetime pass to any American Legion baseball game played in the state of North Carolina.

While Farmer’s work continues to help guide the fortunes of Post 102’s baseball organization, he has also served in other capacities, including Post Commander and Adjutant.

Farmer served his country as well. He was a soldier with the U.S. Army’s 25th Infantry Division during the Vietnam War.

Following his retirement, at the rank of Sgt. Major, after 20 years of active duty, Farmer came home to his native Hertford County and served in a whole new capacity through his involvement with the Hertford County High School JROTC program.

Also, following in the footsteps of his late father, Ray Farmer, he became involved in politics and is now in his fourth term as a Hertford County Commissioner. He has served as chairman of that board.