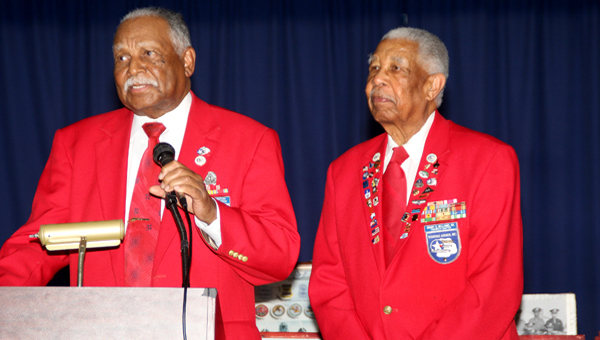 AHOSKIE – They stood straight, they stood firm…their bright red blazers, adorned in military emblems, making them stand out in a crowd.

Grant Williams and Harry Quinton did indeed stand in the spotlight here Friday during their visit to Ahoskie Elementary School, much like they stood out from the rest exactly 70 years ago as the first wave of black men to tackle roles of leadership in our nation’s proud military history.

Williams, a native of Halifax County, VA, rose to rank of Sergeant Major in the 524th Air Service Group. Quinton, who hails from Salisbury, MD, was a Sergeant assigned to the 477th Bomber Group. Both are forever linked to the famed Tuskegee Airmen, the first African-American military aviators/support staff in the United States armed forces.

“Today, history comes alive. Sitting here among you is living history. Our children here today may not realize what is sitting among you, but as you grow older and you show your children pictures of today you will certainly have a piece of history that no one can take away from you,” said Ahoskie Elementary Principal Stan Warren as he welcomed his famous guests in front of a packed audience inside the school’s assembly room.

What was in store was a trip through the annals of American history. Unfortunately for Williams and Quinton, at the time they volunteered for military service they were looked down upon as second class citizens. These two proud men, as did their fellow Tuskegee Airmen, refused to treated as such, choosing rather to serve the country they loved with honor and distinction.

Williams entered military service at Ft. Dix, NJ on Feb. 26, 1942. Five days later he was on a train to Tuskegee, Alabama – later deemed as hallowed ground where young black men of that great generation honed their skills that later served to help pave the way to racial equality nationwide.

“To my surprise what I found there was a group of black men being trained to fly. I’m so glad to stand here today and tell you that experiment turned into greatness,” Williams said.

Williams observed that United States has had men and women of color in every war since the American Revolution. However, at least until World War II, he said those individuals were never allowed to serve in positions of responsibility.

Sharing data complied from an Army War College study conducted in 1925, Williams said that study reported that colored people were cowards, stupid and were not capable of handling complicated machinery.

“That study showed that if black men could fly an airplane, they couldn’t fly and fight at the same time,” Williams said.

To contradict that obvious misconception, Colonel Benjamin O. Davis Jr., a back man who had studied at West Point Military College, was sent to Alabama to lead this grand experiment.

“He set out to prove that black people could do things to save other people; that they could fly; that they could fight,” Williams said. “He made us toe the line because we were being watched; if we fail, America will fail. We took him at his word.”

Williams said at the outset the Tuskegee Airmen program was limited to only one squadron, adding it was already pre-determined by the white controlled military that it would fail.

“As the war progressed they had a need for additional pilots and they activated three additional squadrons,” he said, adding that the black fighters progressed to operate more sophisticated aircraft.

Two of those fighter pilots went on to perform a feat never before or since has been matched….sinking a German destroyer with machine gun fire only.

Williams’ group wound-up in Michigan for additional training, eventually shipping out overseas to catch up with the 99th Fighter Squadron, who by this time had fought in North Africa and then the Battle of Anzio where they shot down 16 enemy aircraft.

What successes the Tuskegee Airmen and support staff earned were basically on their own. Williams said the brass in charge of the overall air operations were not overly anxious to teach blacks the tricks of the trade.

“We did some things that helped turned the tide of the war,” Williams recalled. “America was losing as many as 25 bombers a day, with each bomber carrying 10 or more men. Colonel Davis was asked if his men could help to save some of these aircraft we were losing.”

Serving as fighter escorts for the bombers, the Tuskegee Airmen helped to save American lives in the air, so much to the point where the bomber crews, comprised of mostly white personnel, began asking for the black fighter pilots to provide escorts.

Williams recalled the pride instilled in the Tuskegee Airmen. They showed that pride by painting the tail sections of their aircraft bright red – leading to the distinction of being known as the “Red Tail Angels.”

“It wasn’t too long afterwards that the Germans found their war efforts crumbling,” Williams recalled.

The “Red Tails” flew 1,578 missions, were honored individually with 58 Purple Hearts, 14 Bronze Stars, three Presidential Unit Citations, and three Silver Stars. The last four enemy aircraft shot down during the war in Europe were credited to the Tuskegee Airmen.

“The war was over and we returned home, hoping things were better (race relations), but we found the same thing as when we left,” Williams said. “When we first shipped out from Newport News (VA), there was one gate for whites and one for blacks; we came back through those same gates.

“However when the war was over some changes were made and things came a bit easier for blacks,” he added. “Now, everyone looks at us as heroes. All we did was the job we were asked to do.”

Quinton’s military service did not find him in harm’s way overseas. Rather, he fought a much different battle, one of dignity, on friendly soil.

Working as a drug store delivery boy during his senior year in high school, Quinton was asked by his boss of his plans after school. Quinton told of his hopes to attend Hampton (VA) Institute to study auto mechanics.

“He told me why not strive to be the very best and become an airplane mechanic,” Quinton recalled. “I knew what he was saying…reach for the top.”

Quinton then heard of the program that was teaching blacks to fly airplanes. He initially enrolled in aviation school at Trenton, NJ at the age of 17. Later he transferred to the Casey Jones School of Aeronautics where he completed a course in airplane mechanics and became a licensed mechanic.

He enlisted in the Army Reserves, but a test revealed he could not become a pilot. Rather, he was shipped to the Air Corp where he became a member of the 477th Bombardment Group.

Quinton’s unit found life in the military littered with race-related potholes. His first commanding officer did not want to have anything to do with black servicemen – calling them a “sideshow.” There were separate officer’s clubs, run down barracks, and the black soldiers were denied the purchase goods and services in nearby towns.

Finally, Quinton and his mates caught a break when the war ended in Europe and Colonel Davis was placed in charge of Godwin Field, Kentucky where Sgt. Quinton was stationed at that time.

“Colonel Davis was the first black to be put in charge of a base,” Quinton said. “He proceeded to get us ready for acceptance into the growing war in the South Pacific, but the white commanders there did not want to accept black units so easily because they still had to maintain segregation at all costs. The Japanese and the Germans, they didn’t care who they shot. They didn’t have black and white bullets.”

Soon after, the U.S. dropped the atomic bomb on Japan and the war was over, thus keeping Quinton and his fellow black troops stuck on American soil.

“No matter what the blacks did in the war this was still a white’s man country,” Quinton said.

Now things are much different; people of color are serving their county, their state and nation in positions of power…facts that make Quinton a very proud man.

“Dare to dream big; hitch your wagon to a star because knowledge is all powerful and you can do great things,” Quinton said in challenging members of his young audience.

It was announced for the first time at Friday’s function that the two former airmen would be bestowed honorary doctorates later this year from Old Dominion University.