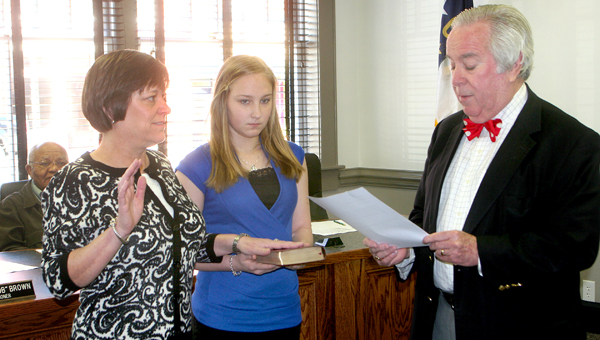 WINDSOR – Cathy Wilson has been appointed to the Windsor Board of Commissioners.

During their regular meeting Thursday the group unanimously chose Wilson to take on the role held by the late Collins Cooper.

“I am excited about this opportunity,” Wilson said. “I am very grateful and appreciative of the board for the trust they have placed in me. I think we’re going to make a great team.”

Cooper was reelected to his second term on the board in November and was just two months into the four-year appointment when he died unexpectedly last month. The board was charged with filling the vacancy for two of those four years. The seat will be placed on the ballot in November of 2013 during a special election.

Thursday, Mayor Jim Hoggard said he had researched the town charter in reference to filling the vacancy. He said the charter called for nominations to be made followed by a roll call vote.

Upon opening the floor for those suggestions, Commissioner Joe Alexander nominated Wilson to take on the post. No other names were brought forward and the floor was closed. Upon the roll call vote each of the four board members favored Wilson.

Upon the selection, Hoggard called on Bertie County Clerk of Superior Court John C.P. Tyler to administer the oath of office.

After receiving greetings from the board and the public, Wilson took her seat.  Hoggard then appointed her to continue the duties held by Cooper, including serving on the Mid-East Commission and as Parks Commissioner and Cemetery Commissioner.

After the meeting Wilson said she was pleased with the appointments and would begin work immediately.

“My first priority will be moving forward with getting the fence down at Edgewood Cemetery,” Wilson said, referencing a request made by the mayor earlier in the meeting. “Also, Wayne Hill does an excellent job with Livermon Park and I want to meet with him and see if he has ideas to make the park better.”

Wilson said she was also hoping to hear from members of the community if they had ideas on ways to improve the park.

In addition to her newly appointed position, Wilson has been involved with the Windsor-Bertie Chamber of Commerce as well as having served on the board of the Bertie Arts Council and the Cashie Country Club.

She is currently President of the Episcopal Women at St. Thomas Episcopal Church in Windsor. She also serves on the board of The Opportunity Shoppe, which is a ministry of the church.

Wilson has been employed with Century Link for more than 25 years and has been a resident of Windsor for more than two decades. She has a daughter, Taylor.