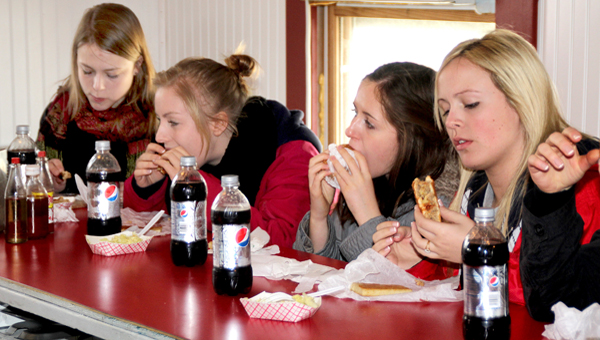 WINDSOR – No matter your cultural background, there’s a universal language that always breaks the ice when greeting a guest from a foreign country – good food.

That fact was on grand display here Monday where Bunn’s Barbecue in downtown Windsor served up its world famous pork, cole slaw and unique cornbread to a group of students and teachers from Gribskov Gymnasium School, located in Helsinge, Denmark (a small town near Copenhagen).

The visit was part of a week-long tour of the United States by the Danish group. They arrived March 1 in Washington, DC, spending two days touring the U.S. capital. The group flew to Raleigh on March 4 where they toured the state Museum of History and were treated to a visit by State Superintendent June Atkinson.

The group, to include 27 students, arrived in Edenton around 6 p.m. on March 4 where a good, old-fashioned Southern covered dish supper was shared between the locals and their foreign guests. Students, staff and parents of John A. Holmes High School in Edenton served as the hosts, thus returning a favor from 2011 where five adults accompanied 26 Holmes students for a trip to Denmark during the school’s Easter break.

“They enjoyed the flavor of our food,” said Elizabeth Huff, a Gates County native now residing in Windsor who serves as a counselor at Holmes High.

Following Monday’s visit to Bertie County, which included lunch at Bunn’s and tours of Historic Hope Plantation and the Roanoke-Cashie River Center, the Danish guests made presentations to Chowan County elementary school students on Tuesday; took a Wednesday road trip to Nags Head; and were treated to a pig picking in Edenton on Friday. The visitors were scheduled to return home this weekend.

Bunn’s co-owner Russ Russell welcomed the foreign visitors and Chowan County guests to the historic restaurant, one opened in 1939. He showed the group a photo of the famous flood of 1999 (from Hurricane Floyd), one that completely submerged the restaurant. Other floods have since followed, but each time Bunn’s has bounced back.

“We’ve had a lot of folks walk through these doors over the years; to my knowledge these are our first guests from Denmark,” said Grace Russell, co-owner of Bunn’s. “We have served foreign guests before. It was more than 10 years ago that three individuals from Auckland, New Zealand stopped in for lunch.”

While famous for its eastern ‘Carolina style pork barbecue and cornbread, Bunn’s isn’t blessed with an abundance of seating. The left and right dining rooms were filled with students and teachers. Meanwhile, the remainder of the group used the dining room of Hammerheads Oyster Bar (less than one-half of a block away) to enjoy their barbecue lunch.

Most all the visitors chose barbecue sandwiches as their lunch entrée…..a handful committing a cardinal sin by covering the ‘cue with ketchup. Some opted not to include cole slaw on the sandwich, but did try that southern staple on the side. They were also treated to Bunn’s famous cornbread.

This cultural visit allowed the Danish students and adults to witness first-hand how Americans live their daily lives. The foreign visitors also used their time to gather more information on the American style of government and our system of welfare.

“We were able to see how our two countries operate constitutionally,” said Margit Nielsen, an English teacher at Gribskov School.

Nielsen said the basic educational structure of Danish schools mirrors that of the United States. However, she said American high schools offer more electives for their students.

“The main thing about this exchange of visits is it gives both sides a chance to see the difference in day-to-day living styles,” observed Mogens Christensen, a History teacher at Gribskov School.

“We are impressed with the level of parental involvement in the schools here in the States,” Nielsen noted. “The parents in Denmark are not as involved in our schools as you find here. Danish parents support their kids, but once they live the door at home that’s it. They don’t take an active interest.”

Sonya Rinehart, a History teacher at Holmes High, said there was a flip side to that observation.

“We found the students in Denmark to be more responsible and more self motivated,” she stressed. “They don’t wait on their parents if something happens, they assume responsibility. That self independence, that self responsibility is something I would love to see more of in our students.”

“Our visit to Denmark last year and their return visit this year by the Danes to North Carolina has been a wonderful way for our students to acquire international understanding.  I was so proud to showcase my home county, Bertie, to our international visitors,” Huff said. “Bertie County hospitality was outstanding, and, of course, Bunn’s Barbecue was the best.”

“Through this exchange they are being immersed into the cultures of eastern North Carolina,” Rinehart said.  “We were pleased to be able to showcase Edenton as well as areas in Plymouth and Windsor to fully capture what life is like for our students.  The hospitality displayed by the citizens of these areas made the Danish students feel at home and very welcome.  We are fortunate to live in an area that is so generous and open to building new relationships.”

As a history buff, Christensen was enthralled with the visit to Hope Plantation.

“Hope Plantation was a beautiful place, much different from anything in Denmark,” he stated. “Bunn’s Barbecue was unlike anything I have ever had. The sandwich with coleslaw will stay forever in our minds and the cornbread was fantastic. The River Center was great. We got peanuts there, and they were absolutely terrific. The guide knew what he was talking about.”

The Gribskov students were also impressed with their first visit to the United States.

“I learned a lot of history about America and the influence of Europeans,” said Charlotte Poulsen. “I thought it was interesting to learn about life on the plantation, for example, the children ate separately from the adults, and people did not take a lot of baths. I also learned about the life of slaves. Bunn’s Barbecue had a lot of charm. It was very cozy, and we were welcomed so graciously with a sign and by the owners. The River Center told us about the wildlife in the area. The museums in America have a lot of hands on exhibits. I learned a lot.

“I thought Bunn’s was very American. I loved the food,” said Freja Johannesen. “At Hope House, I learned about a widow’s walk. I really enjoyed looking at the house. Our tour at the River Center by Neil Moye was very interesting.”

“The barbecue was really different. I had never tasted it before. It was good,” said Mads Bredtoft. “Hope House was interesting to learn about. The River Center taught us about North Carolina animals. Our trip has been really good and different.”

Good and different – just the way it was intended to be when different cultures meet.