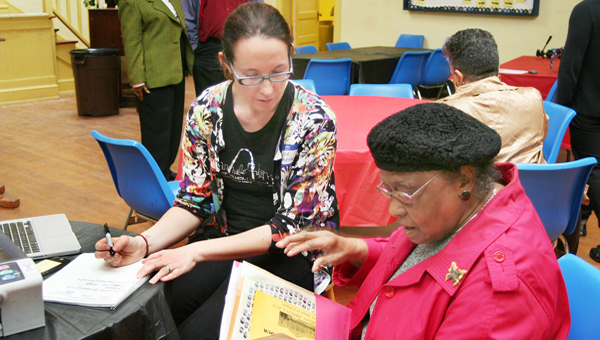 WINTON — Between the years of 1912 and 1932 more than 5,000 Rosenwald schools were constructed for the education of African Americans in the South.

During this time, Hertford County saw 10 such schools built within its borders, four of which still stand today.

On Saturday, the alumni of the various schools reunited at the C.S. Brown Cultural Arts Center to share their experiences attending the historically notable schools in an effort to preserve that part of Hertford County’s history.

Local filmmaker Caroline Stephenson of Como along with students from David Duncan’s digital media class from Hertford County High School were on hand to capture the alumni’s thoughts and memories. Stephenson, with Barn Films, is currently working on “Children Go Where I Send You,” a documentary film about the Hertford County Rosenwald schools.

A rough cut of the film was shown to the alumni during Saturday’s reunion. The finished product will be shown in June at the Tuskegee Institute in Alabama at the National Trust For Historic Preservation’s Rosenwald School 100th Anniversary Celebration.

Stephenson said the film will be premiered at local film festival in the works for June at C.S. Brown.

“The idea of Rosenwald Schools, to me, is very American,” she said. “Why is it American? Because they’re about freedom and they’re about knowledge and knowledge is power.”

Stephenson said the impact Rosenwald schools had on Hertford County and the southeastern U.S. was “immeasurable.”

“The fact that children who lived in extremely rural areas, dirt roads/paths, in the bush—literally, had an opportunity to be educated, they had an opportunity, essentially, to obtain full citizenship,” she said.

Stephenson said the Rosenwald School project was a collaboration between educator and political leader Booker T. Washington and Julius Rosenwald, a Chicago philanthropist and business man.

“Julius Rosenwald was a Jewish man, he felt that African Americans in the South were persecuted much like Jews were persecuted in Europe, and he felt like he needed to do something about it,” she said.

The Rosenwald Fund donated millions to the education of African Americans and over a period of 20 years 5,300 schools were constructed for African-American school children, whose education was stifled by Jim Crow Laws. North Carolina had more Rosenwald schools (800) than any state in the southeast.

The 10 schools in the county were build between 1919 and 1927 and included the Catherine Haynes School in Harrellsville, Cotton School in the California community, Mill Neck in Como, Mt. Sinai in Como, Pleasant Plains in Winton, Riverview in Murfreesboro, Union on Liverman Mill Road, Vaughantown in Murfreesboro, Water’s Training Auditorium (C.S. Brown) in Winton and White Oak near Harrellsville.

During the event seven students from Duncan’s class filmed the reunion and took photos. The students later interviewed alumni for the film. The students also shared some of their films they made in class.

Duncan said his students were benefiting from the experience, both in utilizing their skills learned in class along with the historical aspect.

“Here, opportunities of this nature don’t come along (often),” he said. “To have this opportunity to something on a national level and receive credit is great.”

Duncan added having the filming and historical aspects was a “great two edge sword.”

Stephenson said she wanted the students involved because she’s a strong believer in media literacy and the students needed to learn about the history.

“This is how to be competitive,” she said.

Stephenson said those students involved will be interviewed about education because she wants young people’s perspective on the matter.