Ridgecroft wins ‘Battle of the Books’ 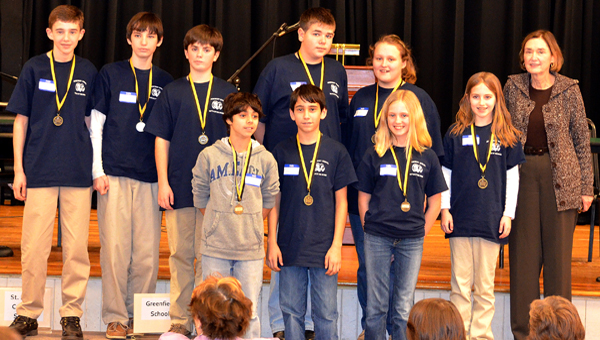 A group of the school’s middle school students provided how much they knew earlier this year when they won the Eastern Division competition for the North Carolina Battle of the Books program.

“I am thrilled for this team who worked very hard to prepare for the competition,” said Jerrie Taylor, who sponsors the program at Ridgecroft. “Not only did they have to do an amazing amount of reading, they also gave up many lunch breaks for team meetings and practice. It has been a lot of fun for all of us.”

To prepare for the competition, the middle school students at Ridgecroft had to read a list of 27 young adult books and compete in answering questions about the material they read. The competition is sponsored by the North Carolina School Library Media Association, which is an organization of public and independent school library media coordinators and administrators from across the state.

The book list for this year’s event included: Treasure Island by Robert Louis Stevenson, Good Night, Mr. Tom by Michelle Magorian, Chasing Lincoln’s Killer by James L. Swanson, The House of the Scorpion by Nancy Farmer, The Road by Emma Clayton and The Witch of Blackbird Pond by Elizabeth George Speare.

“I am extremely proud of our Battle of the Books Team,” Ridgecroft Headmaster Aron Martin said. “Their diligence and hard work paid off against some extremely stiff competition.

“They have made us all so proud with their achievement and have brought great honor and notoriety to their great school,” he added.

The winner for the state of North Carolina will be announced later this year.

LUMBERTON – The Eagles of Bethel Christian Academy flew high here as they completed a perfect season within the North... read more