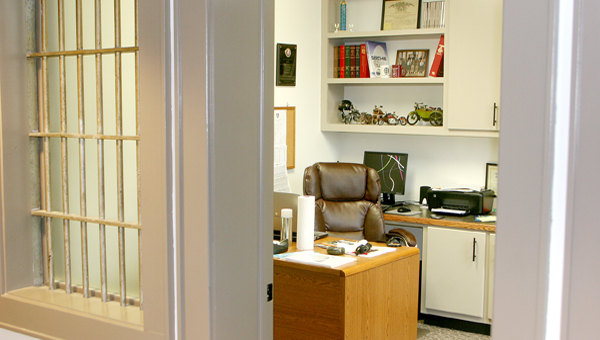 The office of Windsor Police Chief Rodney Hoggard was among those receiving an upgrade during the recent renovations of the Windsor Town Hall. While the renovations were in progress, the bars from the town’s old holding cell were found. They were left as part of the decoration of the Chief’s new office. Staff Photo by Thadd White

WINDSOR – The staff of the town of Windsor is starting to settle into their recently renovated Town Hall.

Last week, the Town Hall staff officially made the move from the small trailer in the town’s municipal parking lot back into the structure which had been closed since October of 2010.

“I’m totally pleased,” Windsor Mayor Jimmy Hoggard said. “I’m really happy with all of it. The builders did a great job, the concrete work was great. I’m really satisfied with the work.”

The Windsor Town Hall was originally closed a year and a half ago because mold was discovered under the facility in the wake of flooding caused by the remnants of Tropical Storm Nicole.

“We didn’t get water in the building, but there was severe mold in the crawl space,” Hoggard said. “I didn’t think it was that bad until I came in with them one morning when they opened the building and it would take your breath away.”

The Windsor Board of Commissioners had been discussing making major renovations to the building before the flooding. The structure had not had any major work done since it was built more than 50 years ago and Hoggard had appointed Mayor Pro-Tempore Hoyt Cooper to begin the process of renovation.

It was decided that while the Town Hall was closed to repair the mold, it would be better to proceed with the renovations at the same time.

The first part of the process was to remove the old wood flooring of the building, fill the crawl space with sand and to it off with concrete.

“We can’t get mold there again,” Hoggard said. “Even if the water were to get on top of the floor, it can’t get under it.”

In addition to that work, the town board agreed to go forward with upgrading the wiring and making several changes to the upstairs of the facility as well as upgrading other maintenance systems.

Part of that process was an application for an energy grant which was approved a week after the floodwaters receded from the town. That grant paid for new air conditioning and heating units, lighting and plumbing.

The town also moved the computer server unit and upgraded wiring to take care of better technology in the building.

“We upgraded things for today’s technology and hopefully tomorrows as well,” the mayor said. “We have the capability to add on to what we have.”

Upstairs, Town Administrator Allen Castelloe’s office moved to a new location. The town’s chief administrator had been working in an office that was simply a pass-through to the mayor’s office.

The renovations also included major upgrades to the mayor’s office and the creation of a map room and storage room to provided better utilization of space for town employees.

“Other than that, we carpeted and painted in some spaces because they didn’t require major work,” Hoggard said.

The mayor said the only major work left to be done to the town hall was the back entrance. The handicap ramp needs to be removed and the entrance way changed since it will no longer be used for public access.

The front of the building is now handicap accessible and is the main public entrance.

He said there was also new security provided in the building.

Hoggard said he hoped the town’s citizens would stop by and look at the changes made and the upgrades that have been added to make the facility nice.

“I think we succeeded in making changes that were cost-effective, but nice,” he said. “They town was frugal in spending, but provided the citizens a building that is most efficient and nicer.”

The Windsor Town Hall is located at 128 South King Street.

Some of the photos in a collection owned by a group of Bertie County residents is displayed at the Bertie... read more