AHOSKIE – A fire of a yet undetermined cause completely destroyed a residence near here Thursday afternoon.

Michael Bradley, Chief of the Ahoskie Rural Fire Department, said that a single story, brick residence owned by Patricia Beasley on Brinkleyville Road was gutted in the two-alarm blaze. 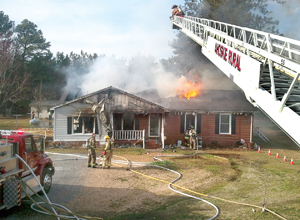 Ahoskie Rural Fire Department’s new ladder truck was put to use for the first time on Thursday afternoon at this blaze on Brinkleyville Road. Contributed Photo / Eric Whitmeyer

Beasley was not at home at the time of the fire, reported to Ahoskie Rural at 3:14 p.m.

Bradley said a neighbor first noted smoke coming from the residence and called 9-1-1.

“There was heavy smoke coming from the residence upon our arrival,” Bradley said. “We believe the fire had been burning for a while before it was called in. When we arrived the fire was already in the attic area and it didn’t take very long for it to break through the roof.”

Ahoskie Rural responded with 15 firefighters and four units, including its new ladder truck that was used for the first time on a fire call.

Due to the intensity of the blaze, members of the Winton Volunteer Fire Department were summoned to assist Ahoskie. Winton VFD responded with one unit and seven men.

Bradley said he and Hertford County Fire Marshal Chris Smith sorted through the rubble in an effort to determine the cause of the blaze. Bradley added that investigation did not turn up a cause.

Ahoskie Rural units and men cleared the scene at 7:30 p.m.

Citizens of the Year

The Citizens of the Year for 2012 in the Roanoke-Chowan region are Askewville Baptist Church Pastor the Rev. David Crumpler and... read more