Citizens of the Year 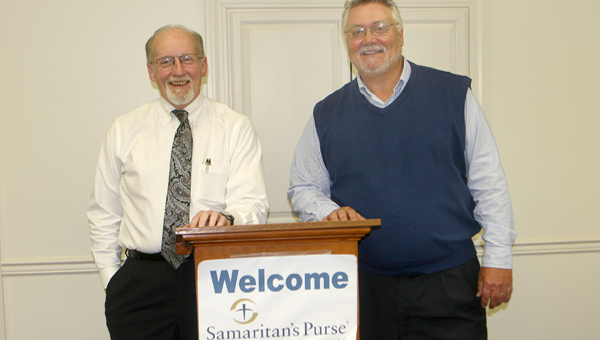 They were the faces of two congregations of believers who came together during a time of crisis.

As pastors of churches that were mere blocks apart in the small town of Askewville, the Rev. David Crumpler and his counterpart, the Rev. R.O. Denton Jr. already knew each other.

They were friendly and had discussed ways of getting their congregations more involved with each other. Denton is Pastor of Askewville Assembly of God and Crumpler serves the parishioners of Askewville Baptist Church.

That spirit  of unity was taken out of their hands and placed in the Almighty’s himself on April 16, 2011 when the Askewville community was hit hard by a tornado that ripped through homes and left devastation in its wake.

“My first concern, obviously was the people,” Denton said. “I actually saw the tornado heading that way and told my wife we needed to pray and we did.”

As the hours of Saturday night drew on, both pastors and their congregations were already out looking for victims and trying to make sure people were accounted for and well.

“Obviously, the tornado came through at night so we didn’t know the extent of the damage,” Crumpler said. “I knew Braxton’s (Jernigan) house was destroyed and the trailer park was gone, but we didn’t know how bad it all was.”

The real work began at morning’s light on Sunday when the severity of the damage was visible. Both churches went to their own sanctuaries to meet and have service.

“Our telephone service was obviously out so we just gathered in the dark sanctuary with whoever could come to church,” Denton said. “We decided to go forward with whoever showed up and certainly to understand those who didn’t.”

Crumpler said his congregation had the same feelings.

As they gathered, each congregation separately began the work of deciding how to best minister to the needs of the community. Both realized victims and volunteers would need to be fed. Both also realized the need of getting to those who were hurting and needing God and the people of God.

“I left the work site to go to church,” Crumpler said. “It was the first time I ever led service in jeans and work boots.

“Someone asked about how to feed the people and I told them they were in charge of food,” he mused. “Another asked about laundry and told them to handle that. Little did I know the same thing was happening down the street.”

The Baptist pastor said he told his congregation he would call Denton to inform him of what was their plans were.

“When I told him what we were doing, he kind of chuckled and said they were doing the same thing,” Crumpler said. “We decided then to combine things because there was no need to duplicate the efforts.”

Denton said his service had gone much the same as Crumpler’s.

“We immediately started brainstorming with what we could do to help the community,” he said. “The ladies popped up and said they would cook and the men said they would get chainsaws and go into the area to see what they could do.”

Denton said his congregation was particularly worried about Danny and Dolly Jernigan because he knew their home had been badly damaged, but it was quickly obvious that many others were hurting as well.

“When it started, we got food from wherever we could,” Denton said. “We got some from our food bank and members of the two churches donated some and we just did the best we could.”

The two churches quickly began to organize their efforts and work together on the cleanup, feeding those who suffered damage and the volunteers, and working to get those who lost their homes a place to live.

“We were flying by the seat of our pants to begin with,” Crumpler said. “It’s probably a good thing we didn’t know what we were doing because if we had we probably would have said it was impossible.”

Both preachers were involved in the hands-on efforts of the cleanup – exchanging their normal Sunday best for jeans and work shirts. They each felt it was important to be working and helping as much as they could.

“Initially, my thing was more helping in the cleanup role,” Denton said. “I was out there trying to help in as many ways as I could. When the effort developed into such a big effort, I went into more of a supervisory role trying to answer the questions people had about certain situations.”

Crumpler said he was also involved in the hands-on cleanup, but was busy with several other operations as well.

“I wanted to get out and help people,” he said. “We checked on church people we knew had damage and also stopped at a lot of homes of people who didn’t go to church. We wanted to listen to their stories, pray with them and generally be there for them.”

Crumpler said he was particularly interested in trying to help those in law enforcement and EMS because they had been working all night April 16 and well into the next day without a rest.

By Sunday evening, April 17, Samaritan’s Purse had arrived in Askewville to help. They quickly set up to help people, but were also complimentary of the work being done by the two churches.

“I think the best compliment we got was from Luther Henderson of Samaritan’s Purse,” Crumpler said. “When he got there, he said two things that made me feel really good. First was that with the organization we had, we didn’t need them, which wasn’t true.

“He also said he had been to a lot of sites, but had never seen churches cooperating the way we were,” he added. “He said it wasn’t just the pastors, but the churches were taking care of everyone. That shows what the Kingdom is about. We get too wrapped up in your church and my church, your denomination and my denomination, but it’s not about that. It’s about God’s people, the people of Askewville.”

As the two churches worked together under the leadership of their pastors, the work was getting done quickly and efficiently and both said they were so pleased with the way things were carried out.

“I’ve never been part of anything like it,” Denton said. “I wouldn’t even begin to be able to tell you how many people were working. We had volunteers from throughout the community and places well away from here.

“I was very pleased with how people worked together,” he continued. “What happened was not something that you can plan,  but was people seeing  a need and doing it. That was the blessing of the whole thing; people as a community saw a need and worked together to get it done. It is one of the blessings of a small community.”

Crumpler said he was also pleased with the efforts.

“In the days following the tornado, especially the first week or 10 days, to see 200 or 300 people showing up from the area and wanting to help was something special,” he said. “Unfortunately, you don’t see that everywhere. It’s a great thing and gives me pride, but that’s just the way we are in Askewville.”

As the cleanup effort shifted, the main location did as well.

“The first week, no one had electricity except the gym at our church,” Denton said. “The next week we didn’t have school because of spring break. We had everything for two weeks in our gym, but as time came to open school back up, the folks of Askewville Baptist were happy to move everything to their gym.”

“Once the cleanup was pretty much done, as far as getting debris to the side of the road and making sure people had somewhere to live at least temporarily, we turned our gym basically into a warehouse of supplies,” he said. “We had food items, clothing supplies, personal hygiene items; everything people would need. It was a distribution center where people could donate anything they wanted.

“We made those supplies available to all victims throughout the county,” he continued. “We became a community center working with FEMA and other relief agencies. We let the building became a gathering place.”

The building remained that way through August with it being used as a supply house and as a place to help provide counseling and other services.

Samaritan’s Purse is still using the facility to house the volunteers that are in the county helping rebuild houses. They will likely be in that facility for another several months as the work to rebuild continues.

“Our gym has become their office, hotel and restaurant,” Crumpler laughed. “When we went to the church, they were in unanimous agreement to let them use the building. The volunteers come in and basically move in for a week.”

While they are there, the volunteers are served breakfast and dinner by neighboring churches, including Askewville Assembly. Others who have been involved in the cooking ministry include Ross Baptist Church, Center Grove Baptist Church, the Place of Possibilities, Edgewood Baptist Church, Windsor Assembly of God and First Baptist Church of Plymouth.

The two men said working together had allowed them to earn even more respect for one another.

“Obviously, he’s a great guy,” Crumpler said of his counterpart. “He’s got a heart for helping people and an attitude of doing whatever he can for people.”

Denton felt the same about Crumpler.

“He is a tremendous asset to our community,” Denton said. “Not only did he encourage his people to work, but he was out there every day. I knew him already, but we formed a better partnership through the storm.”

As the work continues, Crumpler said the hardest part is reminding people that the efforts have not ended.

“Part of the challenge is keeping the urgency and need in front of people,” he said. “Askewville is mostly cleaned up, repaired and replaced. Life goes on and when things get back to normal, sometimes we forget that life is not normal for everyone yet.

Crumpler said the efforts of working together had been beneficial for the community, but was mindful of those in Bertie County who lost their lives.

“Would I want the storm again,” he asked. “No, but good things came out of it. There were 12 people who died and there is no way of replacing that loss of life. Good came, however, in that a few dozen people have gotten a saving knowledge of Jesus Christ and gotten back in church.”

He added that the unified efforts had also helped in other ways.

“Something I’m proud of with the cleanup and rebuild efforts is that it has gone a long way to heal some of the racial divide in this county and to take away from the stereotype a lot of people have about Askewville,” Crumpler said. “The help that has been given and the people providing help couldn’t care less about the race of the person. They just want to tell them God loves them and we’re here to help.”

That message of God’s love was shown deeply through the aftermath of the tornadoes that came nearly a year ago and came through two men who led their congregations in an effort to do everything possible to heal their own community, provide for the people who suffered loss and do so with a heart of love.

The scheduled performance of Joyce Grear’s “Harriet Moses Tubman” has been cancelled, according to the Northampton County Chamber of Commerce.... read more