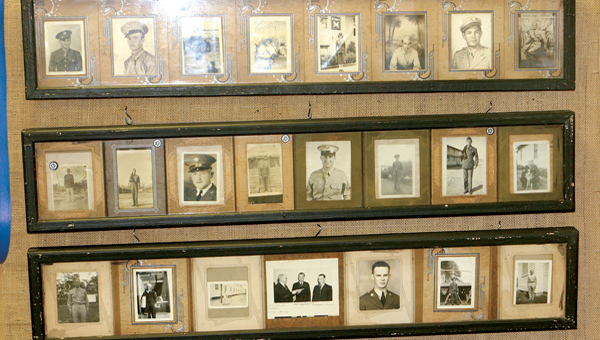 Some of the photos in a collection owned by a group of Bertie County residents is displayed at the Bertie Arts Council. The public is invited to come and identify the soldiers whose pictures are in the frame. The display will be in the Arts Council building for a limited time.

WINDSOR – The Bertie Arts Council and a group of local citizens are asking for the public’s help.

The Arts Council is currently displaying a collection of more than 200 framed photos of World War II veterans in the back room of the facility. The collection is owned by Angie White, Beth White, Lillian Harden and the late Collins Cooper.

The group purchased it in September of 2009 when the Woodville Museum closed and the contents were auctioned off. It was believed to have come to Woodville from the Colerain Museum.

“We were all working on the heritage book for Bertie County and felt like the collection needed to be saved and kept in the county,” Angie White said. “It was very important to save it.”

Most of the photos are believed to be of World War II veterans from Bertie County, but Adalia Powell of the Bertie Arts Council said it is possible some of them also served during the First World War

Powell said it was also displayed in a place people could get to so that individuals who visit can help name the service men in the photographs.

“We are hoping to get as many of them identified as possible before all the veterans are gone,” White said. “We were thrilled to have a place to showcase it and for people to have the opportunity to help identify the photographs.”

Not much is known about the origin of the display. The frames are all made the same and the photographs in them identically. No names are on any of the photos or the display frames.

Thus far approximately 25-30 of the soldiers have been identified by those who have visited the Arts Council.

In addition to having the display, there is a book of the collected World War II memories of Amelia Perry White. She saved newspaper clippings from that time but the original scrapbook was lost in the first Windsor flood.

A copy of it has been put together from the files that had been sent to the Albemarle Regional Library.

The display was placed in the building early in January and will remain for an undetermined amount of time.

White said the owners of the collection hope it will be the beginning of finding a permanent home for it.

“We would like to have a permanent place to display it,” she said. “Hopefully this will open the door to a museum for the county.”