AHOSKIE – In a gray office building just off Loftin Lane in Ahoskie sits a safe-haven for victims of domestic violence and sexual assault.

If those walls at Roanoke-Chowan S.A.F.E. could talk, they would weave a torrid tale of hurt and devastation spaced over years of handling various cases of domestic abuse.  Walking into the Ahoskie office, S.A.F.E.’s main office, you can displace those negative feelings associated with the daily casework that the office experiences.

Upon entering, Catherine Garris, a retired nurse who is from the area, greets you with a warm smile. Garris, who has been the receptionist for R-C S.A.F.E. since 2004, mans a desk that generates those familiar, comforting feelings of that of your friendliest elementary school teacher.

At 76 years young, Garris has seen vast changes take place in the four counties that R-C S.A.F.E. serves.  It’s hard to believe that merely three decades ago, there was little to no assistance or court advocacy in the court systems for the types of victims that R-C S.A.F.E. now serves. 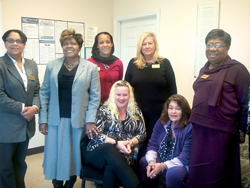 Roanoke-Chowan S.A.F.E., the abbreviation for Roanoke-Chowan’s Services for Abused Families with Emergencies, is a non-profit organization that was founded in September of 1984.  Thelma Askew, the victim advocate for Herford County and Winton native, remembers the early stages of what would become R-C S.A.F.E.

“It started around a woman’s kitchen table,” Askew recalls.

She said in the organization’s infant stages a task force, comprised of individuals well educated and trained on the various aspects of domestic violence, was developed.  It wasn’t until May of 1985 that the name R-C S.A.F.E. was incorporated.

In the early developing stages of R-C S.A.F.E. there was no official shelter that could house victims in need.  Tammie McCarter, the Executive Director of R-C S.A.F.E., describes the struggles that spurred from sagging funds and a lack of a formal shelter.

“As funding allowed, victims were placed in motel rooms for safety,” she said.

In 1986, changes and developments were made and the position of Executive Director transitioned from part-time to full-time.  It was in this year that the staffing was able to expand and a small two-bedroom house served as R-C S.A.F.E.’s first shelter.

Askew recollects, “The first shelter was actually in Winton.  Then we moved to a rental property on Main Street of Ahoskie.  At that time, office space was very limited and therefore combined with the shelter.  It wasn’t until 1993 that R-C S.A.F.E. purchased its first property that would become the shelter.”

According to McCarter, who started working for the organization in 2000 as the Bertie County advocate, R-C S.A.F.E. provides the victims of domestic violence and sexual assault with emergency shelter, food, clothing, transportation to and from court and medical appointments, assistance with filing victim compensation forms, housing referrals, and counseling referrals.

McCarter, who commutes from Suffolk, VA notes that although the quantity and stress level of the casework is heavy and emotional, the results of their labors are well worth it.

“We see women black and blue and you try your hardest to help them with their situation.  We never turn a victim down, no matter how many times she comes in,” McCarter said.

Statistics read that it typically takes a woman seven times before she leaves her abuser.

According to McCarter, “(the victim) may be scared, not just of being abused but of the financial troubles she may encounter after leaving, she may be scared to be alone, and most of the women don’t want to separate their families.”

“They’ve got this mentality that the way they are being treated is acceptable.  We, at R-C S.A.F.E., are trying to educate people.  Abuse is wrong,” stated McCarter. “The four counties we serve are such rural areas that the victims often have no means to leave unless they seek our help.  Any time you’re working with victims and you’re helping them, that is your standout moment as an employee of R-C S.A.F.E.”

The advocates for each county, in addition to being on call 24/7, spend approximately two days of their workweek in court assisting the victims.  According to McCarter, the respective advocate for each county is there to support the client and to serve as a liaison between the District Attorney’s and the client.

“The clients can feel embarrassed that they are in court.  There’s shame involved.  If they cry, we have tissues to make them feel more comfortable,” Askew said.

She continued, “We are not asking them to break up their marriage, we just want them to not live in violence.”

Blannie Hunt, a multi-county Sexual Assault Advocate notes, “You many not be saving them all, but you’re helping some of them. It makes you feel good when we sponsor different programs at schools and educate the children on abuse and the signs of abuse.”

Brenda White, who serves as a multi-county victim’s advocate, gets her greatest enjoyment out of the success stories that R-C S.A.F.E. has experienced.

“When we help and see them rise out of their current situation and we check on the client later and they have a job and a sense of security, that makes all of us feel good,” White stressed.

R-C S.A.F.E. has experienced its fair share of triumphs and trials, including expansions and budget cuts.  Because of its dedicated staff, efficient work environment, and an unwavering goal of providing help to victims of domestic violence and sexual assault, it continues to positively impact the Roanoke-Chowan area.

One of the greatest community outreach programs is the thrift store operated by R-C S.A.F.E., located on Railroad Street in Ahoskie.  Askew says the store serves as an outreach for victims.  The money raised from the thrift store goes towards keeping the shelter up and running.

McCarter notes that often the victims acquire help from R-C S.A.F.E. in emergency situations in which their sole possessions are the clothes on their back.  When this is the case, the victim is given outfits from the thrift store, comprised of clothing and accessories donated by the community.  Community volunteers run the thrift store.

Roanoke-Chowan Services for Abused Families with Emergencies is an under recognized business that has been making an impact on the community for over two decades.  This is a business that has kept achieving and influencing due largely in part to its dedicated workers combined with community support.

McCarter notes that the shelter is still in dire need of upgrades and remodeling.

“Our shelter was in such disarray when we opened,” she said. “We have one bedroom that can be used.  There are five rooms total in the shelter. We are seeking individuals or businesses that would like to adopt a room.  They need everything from heating work to AC units.”

It is community involvement and donations that have helped R-C S.A.F.E. make the developments over the years.  McCarter relates R-C S.A.F.E.’s successes to a very dedicated staff.

While exiting the gray building on Loftin Lane, another wave of reassurance hits you.  A visit to R-C S.A.F.E. ends almost exactly how it started—Garris marks the end of a visit with the same comforting smile that had initially welcomed.

The unofficial mission statement of Roanoke-Chowan S.A.F.E. can be simply summarized in Garris’ words: “I like to see people moving up.”

The faithful staff and volunteers are steadfast and firm in their goal of helping victims of domestic violence and sexual abuse rise above their current situations.