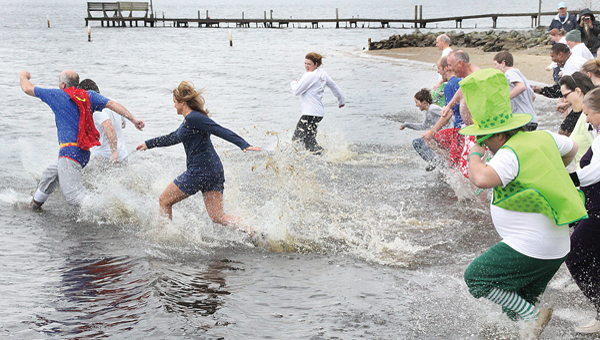 The second annual Polar Plunge to benefit Hertford County Special Olympics was held Saturday, Feb. 11 on the banks of the Chowan River at Tuscarora Beach (in front of Riverside Restaurant). The event attracted approximately 50 plungers - a portion of which are shown in this photo as they dash into the cold water. Staff Photo by Cal Bryant

WINTON – Neither threatening skies, cold temperatures, nor blustery winds could keep 50 plungers from “Freezin’ for a Reason” on Saturday, Feb. 11 on the banks of the mighty Chowan River.

The 2nd annual Polar Plunge to benefit Hertford County Special Olympics was held once again at Riverside Restaurant and was well-attended.  Registration got underway at 11 a.m. and the Plunge occurred at 12:30 p.m.  Door prizes were awarded every 10 minutes to registered plungers and 50-50 raffle tickets were sold.

A warming tent, complete with chairs and heater, was provided by Ahoskie Parks and Recreation and was a popular spot.

Riverside Restaurant was open for business and provided a warm and cozy place for viewing the excitement.

Several athletes were on hand to assist and Eve Greene, Special Olympics Athlete and Global Messenger, made a welcoming speech.  Several local schools and businesses entered teams of brave representatives.

“It was an exhilarating experience to say the least.  The Polar Plunge presents an opportunity to have fun and support a good cause,” remarked Travis Griffin, a participant who happened to win a prize for traveling the farthest distance (Virginia Beach).

Additional prizes were awarded to the youngest plunger (age 12) and the oldest (age 69).  A prize was also awarded for best costume (Irish couple).

In addition to sponsorships and registration fees, many people stopped by the event and made individual donations.

“Our local Special Olympics program would not be possible without support from the community,” said Lauri Heckler, local coordinator.  “All funds raised here are earmarked for support of our local athletes’ expenses such as travel, meals, uniforms and sports equipment.  I’d like to thank everyone who has participated in this and other local fundraisers.  Look for next year’s Polar Plunge on the Saturday after Super Bowl.”