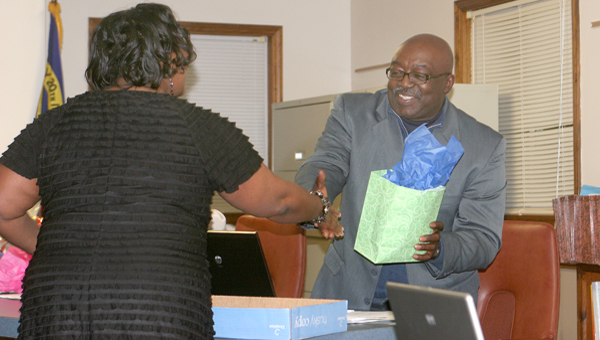 Bertie County Board of Education member Rickey Freeman receives a gift from Bertie STEM School Principal Lisa Parker as part of Monday night’s salute to the school board. Staff Photo by Thadd White

WINDSOR – It was a night of thanks and appreciation.

The five members of the Bertie County Board of Education each said they were touched by the outpouring of support they received from the schools in the district in response to School Board Appreciation Month.

While the month was officially celebrated in January, the board received tokens of esteem from students, staff and others during their February meeting.

Students from Colerain Elementary School appeared before the board to express their gratitude by singing a song of appreciation they had composed. The song was accompanied by a card of thanks which was presented to the board members.

In addition to the song and the card, the board members received hugs of appreciation from the students.

Each board member took the opportunity to say thank you to the students, teachers and administrators.

“Thank you for your acts of kindness and your words of support you have given,” board chair Gloria Lee said. “I don’t have a student personally in the school system, but I feel like they’re all mine.

“You didn’t have to do it, but we appreciate it,” Lee closed.

Board Vice Chair Emma Johnson also expressed her appreciation for the tokens given to the board members.

“Thank you so much,” she said. “We appreciate all your thoughtfulness and all your support.”

Board member Rickey Freeman said he had served for nearly 11 years, but had never received such kindness. He said he appreciated the thoughts.

“I have been here a long time and I truly appreciate tonight and everything that has been done during the month,” Freeman said. “We are very thankful.”

Board member Pamela Chamblee also expressed her gratitude, saying the thoughtfulness of the schools was touching.

“I cannot say how much I appreciate your support,” board member Alton Parker said. “It means a lot to us. We are here one or two meetings a month and you are the ones who make this happen every day. We appreciate you and we thank you for your thoughtfulness towards us.”

The board members were also given tokens of esteem from the school district’s administrative staff.

Clock winds down on White’s career

WINDSOR – It has been a job well done by a good and faithful public servant. Later this year, however,... read more