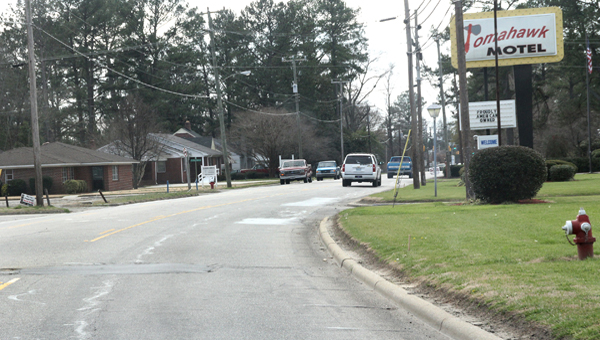 Work is scheduled to begin early next week on a $975,000 project to mill and repave Academy Street (US 13) in Ahoskie. Staff Photo by Cal Bryant

AHOSKIE – As part of US 13,Academy Streetwithin Ahoskie’s corporate limits serves as a major highway, handling thousands of local and out-of-town vehicles each day.

That high volume of daily traffic has taken its toll on the road, so much to the point thatAcademy Streetis targeted for a major rehabilitation and resurfacing project over the coming months.

The North Carolina Department of Transportation will begin that work next week, a project that will encompass four stages and take approximately six months to complete.

According to the DOT’s plans, all phases of the project include milling down the existing surface and then repaving.

Phase one is scheduled to begin Monday, Feb. 13. That work will be performed betweenHertford County High School Road(SR 1223 at Bojangles) toFirst Street(NC 561).

Phase two will involve work betweenFirst StreetandChurch Street. That portion of the project is expected to begin sometimes in mid-June.

Work on the third phase will be performed on the four-lane section ofAcademy StreetbetweenChurch StreetandMemorial Drive.

Phase four consists of paving the final surface and placing the pavement markings.

During each of the phases, the subject portion of the project will be open to local traffic only. Thru traffic on US 13 will be detoured around the work area by using NC 561, NC 11 and NC 42 as applicable for the specific section under construction.

The $975,000 project will be performed by Rose Brothers Paving of Ahoskie.

CREEKSVILLE – Jamal Williams would not allow Senior Night for the Rams of Northampton High School-East to be anything but... read more