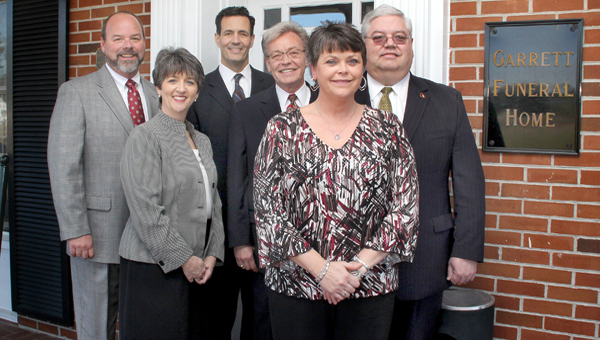 AHOSKIE – What’s better than one? Three.

Garrett-Jones Funeral Home of Ahoskie, Sykes Funeral Service of Rich Square and Altmeyer Funeral Homes, with locations in the Hampton Roads and Williamsburg areas of Virginia, announced Thursday they have formed a business partnership.

“Garrett-Jones, Sykes, and Altmeyer are very proud and excited to announce they have merged all three funeral homes in order to provide families in our communities with professional and compassionate service,” stated a press release issued Thursday afternoon. “With our knowledgeable funeral directors and staff who are deeply involved with the community, it is our goal to offer families peace of mind and personal choices.”

The three partners – Chuck Jones, Scott Sykes and James E. (“Jimmy”) Altmeyer, Jr. – said the strong reputations of each business will serve as the foundation on which to continue to serve families with dignity and respect.

“With our continued commitment I feel this endeavor will benefit our communities greatly,” Jones stated.

Sykes agreed, saying, “I am looking forward to uniting the talents of all the funeral service professionals of these establishments in order to continue the caring service that our families deserve.”

Altmeyer pointed out what he sees as a major advantage of combining his family-owned business with two well-respected funeral homes in northeastern North Carolina.

“By working together as one company it gives us the resources to add more personalization, customization for funeral services,” Altmeyer said, “things like videos and customized memorial cards.”

He continued, “It will also allow us to have better schedules, affording us the opportunity to be more attentive to the families. Scott is a perfect example. As basically a one-man operation he can draw from the personnel resources at Garretts and Altmeyers. We will share our staffs.”

“Our people make the difference,” Altmeyer added. “We are members of the communities we serve and are privileged to be here.”

For the immediate future each funeral home will continue to operate under their current name.

“The Garrett name has been here for a long time and everyone knows and trusts Chuck (Jones),” Altmeyer said. “Likewise for Scott (Sykes).”

Garrett-Jones Funeral Home, established in 1931, and Sykes Funeral Service, established in 1895, have been providing personal, friendly and professional care to the families of Bertie, Gates, Halifax, Hertford, Martin and Northampton counties. Jones and Sykes said their respective businesses have based their longevity on a commitment to excellence by always placing the needs of families they serve first.

“Chuck Jones and Scott Sykes pride themselves in providing the communities with a compassionate and professional staff who deliver outstanding service during a difficult time,” Altmeyer said.

James A. Altmeyer Sr. and James E. Altmeyer Jr. are the third and fourth generation of the Altmeyer Funeral Homes established in 1917. The Altmeyers are proud to say they have been committed to excellence for over 95 years.

COLERAIN – Friday wasn’t the first time an individual who held up a bank here was caught on camera. The... read more