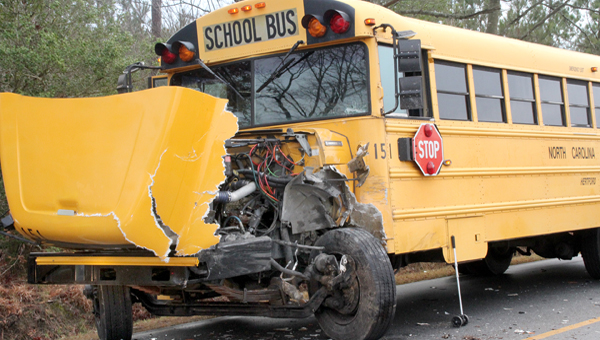 HCPS Bus #151 was involved in a two-vehicle accident early Thursday morning on Jernigan Swamp Road south of Ahoskie. No injuries were reported to the 13 students onboard or to the bus driver. The driver of the other vehicle was injured. Staff Photo by Cal Bryant

AHOSKIE – Several young school students were shaken up, but not injured during an accident involving their school bus near here Thursday morning. The accident occurred around 7:15 a.m. on Jernigan Swamp Road (officially listed as Lee Jernigan Road; SR 1101), just south of its intersection with Jernigan Airport Road. According to a report filed by North Carolina Highway Patrol Trooper J.K. Jones, a 2007 GMC truck operated by Ralph “Pat” Brabble Sr. was traveling south at which time it crossed the center line and struck the left front of the bus. The impact tore away that section of the bus, exposing the engine. The bus was carrying 13 students of Bearfield Primary School and a driver at the time of the wreck. After making impact, the truck veered off the road and came to rest in a field. Jones said Brabble was injured and was transported to Vidant Roanoke-Chowan Hospital. The schoolchildren all walked from their crippled bus and were loaded onto another bus. They were taken to the VRCH Emergency Room as a precautionary measure. The bus driver, Iris Moore of Ahoskie, was uninjured. Following impact, the bus, traveling north, remained in its lane. Brabble was charged with driving left of center. HCPS personnel, to include School Safety Officer Curtis Freeman and Bearfield Principal Julie Shields, were on the scene shortly after the accident. “I need to commend Hertford County Schools for putting their contingency plan in action at the accident scene,” stated First Sgt. Todd Lane of the Highway Patrol’s Ahoskie office. “Mrs. Shields and Mr. Freeman boarded the bus immediately upon their arrival and kept the children calm, resulting in a panic-free environment.” Lane added that a few parents of the students on the bus arrived at the scene after learning the news of the accident. “The school officials quickly advised the parents of the situation, calming their fears as well,” Lane said. “In our line of work you typically see a lot of emotion at an accident scene once family members arrive. In this particular case, those parents’ worries were immediately addressed. “Every one involved, from the parents, children, school officials and emergency responders, assisted in the prevention of this incident turning into a time of panic and confusion,” Lane concluded.

WINDSOR – Down to the wire. Bertie avoided what would have been a huge upset Tuesday night as they claimed... read more